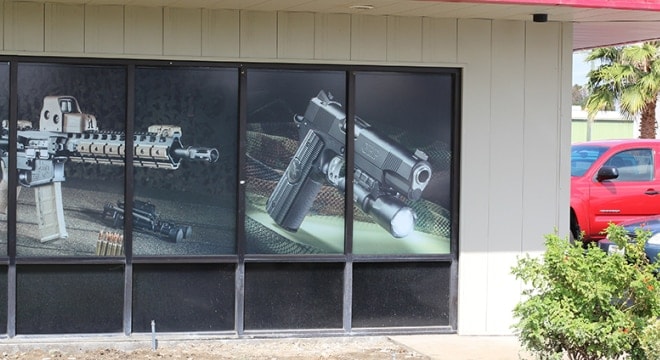 Tracy Rifle & Pistol paid some $3,000 for the window wrap advertisement but was ordered by the state Bureau of Firearms to remove it. (Photo: Tracy Rifle and Pistol)

In a 15-page ruling, Sacramento-based Judge Troy Nunley sided with the gun stores that brought the legal challenge. He found that the state could not cite that the imagery had any effect on handgun suicide or violence over the law‘s 95-year history. Instead, he said it trampled on Free Speech.

“The Government believes if it can inhibit such persons from making the initial decision to purchase a handgun, it will save them from harming themselves or others with the handgun at some later date, likely years from the initial purchase,” Nunley, a 2013 appointment by President Obama and former California Deputy Attorney General, said in his order.

“However, the Government may not restrict speech that persuades adults, who are neither criminals nor suffer from mental illness, from purchasing a legal and constitutionally protected product, merely because it distrusts their personality trait and the decisions that personality trait may lead them to make later down the road,” the judge continued.

The case was brought in 2014 by Tracy Rifle and Pistol, a gun shop and indoor firing range located about 60 miles east of San Francisco in San Joaquin County, after they were cited by the California Department of Justice’s Bureau of Firearms for displaying pictures of handguns in its windows. An inspection by the bureau cited Michael Baryla, the shop’s owner, and gave him three months to take down the $3,000 sign or be fined under the 1923 law.

“I run one of the most heavily regulated and inspected businesses in existence, but it’s still illegal for me to show customers that I sell handguns until after they walk in the door,” Baryla told Guns.com at the time. “That’s about as silly a law as you could imagine, even here in California.”

“Under the First Amendment, the government may not restrict speech on the theory that it will supposedly lead a few listeners to do bad things, or even to commit crimes,” said Volokh this week. “The Supreme Court has held this in the past, and has indeed often struck down restrictions on supposedly dangerous commercial advertising—including advertising for products that some people abuse, such as alcohol. It’s good to see the district court recognizing that the First Amendment has no gun advertising exception.”

The plaintiffs expect Tuesday’s ruling will be appealed by Attorney General Becerra to the U.S. 9th Circuit Court of Appeals.