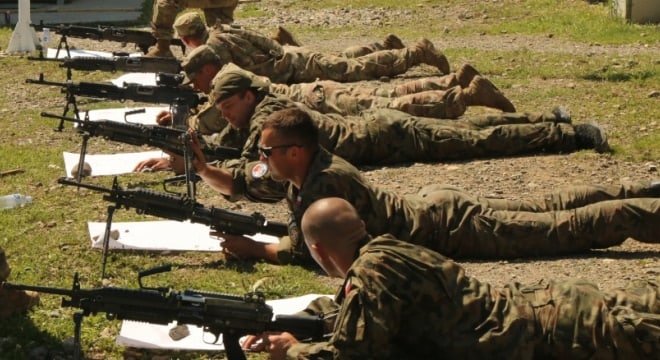 FN America has won a $7 million contract to provide the U.S. Army and Marines with replacement machine gun barrels. The branches currently issue variants of the FN-made M240 and M249, among others. (Photo: DoD)

The $7.19 million firm-fixed price contract was issued through the Defense Logistics Agency to provide barrels to the Army and Marine Corps. The company has long had a lock on belt-fed small arms for the U.S. military.

The Army has used models of the 7.62x51mm FN MAG, adopted since 1977 as the M240, in place of the Vietnam-era M60 general purpose machine gun. This has been augmented by the use of the 5.56mm FN Minimi as the M249 Squad Automatic Weapon since 1984, although the Marines are trying to decrease their reliance on the SAW in favor of the lighter M27 Infantry Automatic Rifle, itself a version of the HK416. Meanwhile, special operations units have used smaller quantities of the FN-produced MK46 and MK48 light machine guns. Going back even further, FN is a manufacturer of the iconic M2 heavy machine gun as well.

According to the award announcement from DLA, the barrels are to be acquired through 2021 and will be produced in FN’s South Carolina plant. The contract includes two one-year option periods in addition to the three-year award.