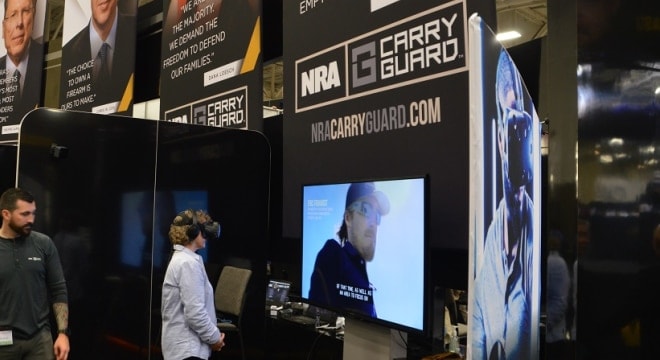 An attendee at the 2018 NRA Annual Meeting in Dallas tries out an interactive demonstrator at the NRA Carry Guard self-defense insurance booth (Photo: Chris Eger/Guns.com)

The California insurance commissioner this week issued a cease and desist order to the National Rifle Association for marketing insurance in the state without a license.

The seven-page order, issued by Insurance Commissioner Dave Jones on Tuesday, alleges the gun rights group marketed an insurance product without properly registering with his office. In the order, Jones contends the NRA sent emails to California residents featuring national spokeswoman Dana Loesch and chief executive Wayne LaPierre soliciting on behalf of the group’s Carry Guard-branded self-defense insurance program, something the organization was not licensed for.

“The California Department of Insurance insists on full compliance with California law that requires persons soliciting the purchase of insurance in California must be appropriately licensed to do so,” said Jones in a statement. “Because the NRA allegedly failed to comply with this California legal requirement, it became necessary for the department to take this action against the NRA to end this illegal conduct in California.”

According to the order, the gun group last year began offering policies with four levels of coverage ranging from $250,000 to $1.5 million in civil defense benefits, and $50,000 to $250,000 in criminal defense benefits with annual premiums varying between $155 and $550. As of July, some 2,397 California residents had active policies.

California’s insurance code forbids a person from marketing or negotiating policies in the state without a valid license from the commissioner, which Jones’ office said the NRA has never held. The order demands the NRA cease offering the insurance in the state under threat of a $5,000 daily fine. Selling without a license could generate a fine of as much as $50,000. The NRA can request a hearing on the matter within seven days.

Jones, a former city and state lawmaker who was first elected Insurance Commissioner in 2010, ran against state Attorney General Xavier Becerra in the Democratic primary for that office this year. On the campaign trail, Jones repeatedly called out his opponent as being soft on guns and has run political ads touting his own position as someone who “takes on the NRA.”

Since debuting their Carry Guard program last May, the NRA has come under fire from regulators in Washington and New York, in turn triggering a lawsuit by the gun group against Empire State officials. The lawsuit argues New York Gov. Andrew Cuomo, a Democrat with a history of enacting gun control legislation, attacked the NRA because it had been a vocal critic and opponent of his gun control policies. The filing further alleges the Cuomo administration targeted no other self-defense insurance except for the NRA’s Carry Guard policies.