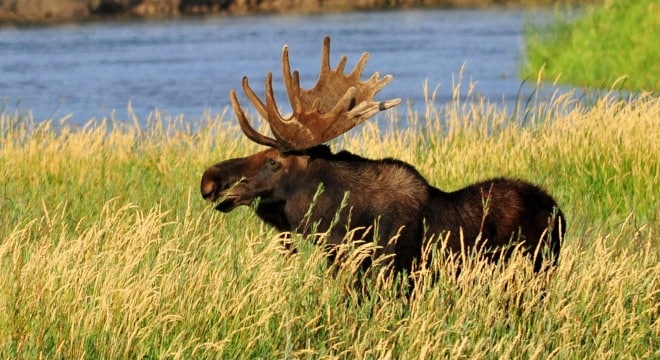 The J. Clark Salyer NWR, located along the Souris River in north-central North Dakota, will be open to moose hunters for the first time due to the order. The 58,700-acre refuge is the largest in North Dakota and is among 30 across the nation where hunting and fishing opportunities were recently expanded. (Photo: Tom Koerner/USFWS)

U.S. Secretary of the Interior Ryan Zinke this month announced the expansion of hunting and fishing opportunities at national wildlife refuges in 22 states.

Among the changes, which increase access to more than 251,000 acres of federal lands for sportsmen, are opening Montana’s Swan River National Wildlife Refuge to big game hunting and Pennsylvania’s John Heinz National Wildlife Refuge to white-tailed deer hunting for the first time. Zinke made the announcement Friday, stressing the country’s outdoor heritage and the importance of the user-pay model.

“American sportsmen and women contribute over a billion dollars a year to fund conservation. Without hunters and anglers, we wouldn’t be able to conserve wildlife and habitat; and, without access to our public lands like National Wildlife Refuges, many hunters would have nowhere to go,” said Zinke. “The last thing I want to see is hunting to become an elite sport, rather than a tradition passed on from generation to generation. Today’s announcement protects critical conservation funding, and ensures sportsmen have access to public lands for generations to come.”

Michigan’s Shiawassee National Wildlife Refuge, Minnesota’s Glacial Ridge and Wisconsin’s Trempealeau refuge will be opened to certain gamebird and small game species for the first time. Those seeking Eurasian-collared dove and Gambel’s quail can find both in New Mexico’s Sevilleta National Wildlife Refuge. Likewise, moose hunters will be able to expand their operations to two facilities in North Dakota — the J. Clark Salyer and Lostwood NWRs. Ohio’s Cedar Point and Ottawa refuges will be opened for the first time for some game, including deer.

During the public comment period on the changes, some 504 submitted feedback, many anonymous. Comments ranged from self-professed sportsmen who backed the changes to those from environmental and animal rights groups who stood against them. Organizations applauding the expansion included the National Wild Turkey Federation, various state conservation agencies, the Theodore Roosevelt Conservation Partnership, the Quality Deer Management Association, and Delta Waterfowl.

Those against the increased access to hunting included the Humane Society of the U.S., which specifically challenged the bear hunting expansion at the Swan River NWR. The group Imagine Our Florida questioned expanded hunting in that state, citing potential dangers to the endangered Florida panther.

According to USFWS surveys and data, some 103 million Americans, or 41 percent of the United States’ population, pursued wildlife-related recreation to the tune of some $156 billion in 2016. These included an estimated 32 million target shooters and 11.5 million hunters. The expansion will produce an estimated increase of 17,575 user days yielding approximately $711,000 in recreation-related expenditures, as noted by the QDMA.

Founded in 1903 by President Theodore Roosevelt, there are some 560 refuges in the National Wildlife Refuge System – a network of lands set aside and managed by USFWS specifically for wildlife. Hunting within guidelines under the new plan expands the sport to 377 of that number.