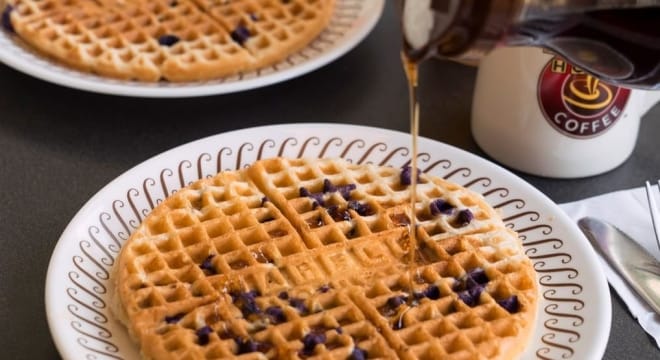 Headquartered in Norcross, Georgia, the 24-hour breakfast chain has some 2,100 locations in 25 states, primarily in the South. (Photo: Waffle House)

Police say the foiled robbery of a Georgia breakfast diner may be linked to the discovery of a dead person in a neighboring area.

The Waffle House location on Hwy. 61 in Villa Rica was the site of an early morning robbery attempt Thursday, reports the Villa Rica Police Department. Authorities say a male suspect entered the restaurant, pointed a gun at employees, and said he was robbing the business.

“A customer who was dining inside then shot the suspect and the suspect fled from the restaurant,” said the agency in a statement. Witnesses told police the man left in a small dark-colored vehicle and the gun used in the heist gone wrong, recovered at the scene, was, in fact, a BB gun.

Villa Rica police say they are working with authorities in nearby Carrollton, who recently discovered a dead person to see if the two cases are connected.

Headquartered in Norcross, Georgia, the 24-hour breakfast chain has some 2,100 locations in 25 states, primarily in the South. Last October, one was robbed for the third time in as many weeks.

The chain in the past has kicked out law enforcement officers and armed National Guardsmen while enforcing their strict “no-guns” policy. This hasn’t stopped defensive gun use by armed concealed carry practitioners in 2015, 2013 and 2012, in each case leaving a would-be robber shot. Last year the chain terminated an armed waitress at a Newnan, Georgia location after she fired a shot in the air on the heels of three fleeing bandits who had threatened to shoot everyone during an armed robbery.

In April, a disturbed man shot four at a Tennessee Waffle House location, leading to a call for more gun control in the state from Nashville’s acting mayor.