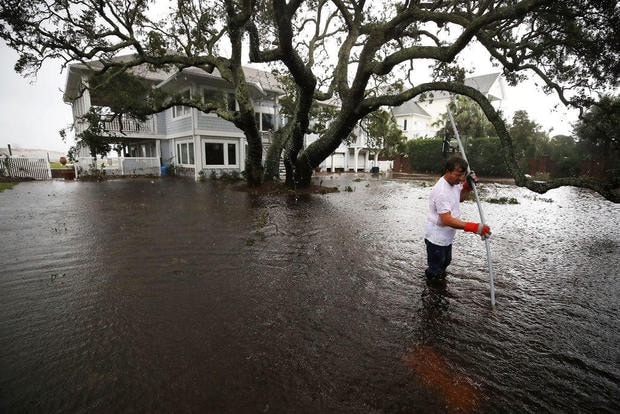 Mike Pollack searches for a drain in the yard of his flooded waterfront home a day after Hurricane Florence hit the area, on September 15, 2018 in Wilmington, North Carolina. (Photo: Mark Wilson/Getty Images)

No federally licensed dealers reported any store break-ins or thefts during Hurricane Florence, the Bureau of Alcohol, Tobacco, Firearms and Explosives confirmed this week.

April Langwell, chief of the ATF’s public affairs division, told Guns.com on Monday the agency received zero reports of firearms stolen during the storm — a stark difference from hurricanes past.

Last year, looters made off with more than 100 guns after Hurricane Harvey dumped more than four feet of rain on Houston, sparking catastrophic flooding across the city. Dealers located in storm-impacted states during Hurricanes Irma and Matthew, likewise, said criminals took the opportunity to break-in, stealing  dozens — and in one case, hundreds — of guns.

“During hurricanes and similar natural disasters, ATF regularly communicates with the Federal Firearms Licensees in the affected areas to ensure they are employing best safety practices available to secure their inventory and records during the storm,” ATF spokesman Christopher Elolf told ABC News last week.

“Not only are the FFLs victimized — at times, assaulted or killed in the course of a robbery — the stolen firearms fuel the illicit market, too often ending up in the hands of violent criminals who wreak havoc in our communities and pose an immediate threat to our partners on patrol who confront them,” he said.

Hurricane Florence made landfall late Thursday off the coast of North Carolina, packing 90 mph winds and dumping more than 30 inches of rain across some parts of the state. Flooding, tornadoes and widespread power outages continued wreaking havoc up and down the southeastern seaboard Monday, with some 25 deaths attributed to the storm so far.

“This a monumental disaster for our state,” North Carolina Gov. Roy Cooper told CBS News. “In many parts of North Carolina the danger is still immediate.