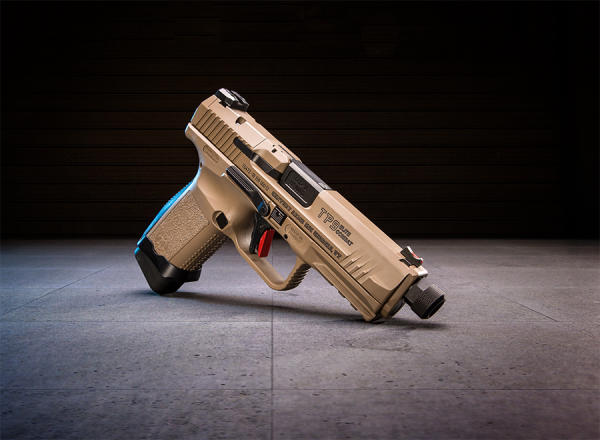 The TP9 Elite Combat builds on the TP9SF, but adds a splash of color and some upgrades. (Photo: The Outdoor Wire)

The gun provides an extended magazine release in addition to an optics-ready slide with adapter plate and charging handle as well as a new flat-face aluminum trigger design. The pistol is a collaboration between Salient Arms and Century Arms. (Photo: The Outdoor Wire)

“Century and Salient Arms agreed on the TP9SF Elite as the ideal platform for the new Combat model due to its popularity and versatility, with its size being ideal for both concealed carry and full duty applications,” Jason Karvois, Director of Sales for Century Arms, said in a press release.

Jacob Lunde of Salient Arms said that the pairing of the two companies brings a custom look to the pistol without breaking the bank.

“Salient Arms International first noticed Canik very early on,” said Lunde. “We were very impressed by how well the pistols performed, and left with a high respect for the product. Even prior to collaborating on the project, we would quickly recommend Canik pistols to anyone look for a great value in a pistol. We were excited to consider a collaboration, and to further enhance the already excellent line-up of Canik pistols.”

Shipping with a retention holster and three magazine extensions, the TP9 Combat Elite retails for $849. 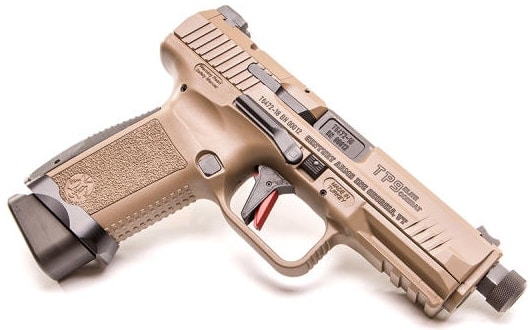 The TP9 Elite Combat features an all tan look. (Photo: The Outdoor Wire)