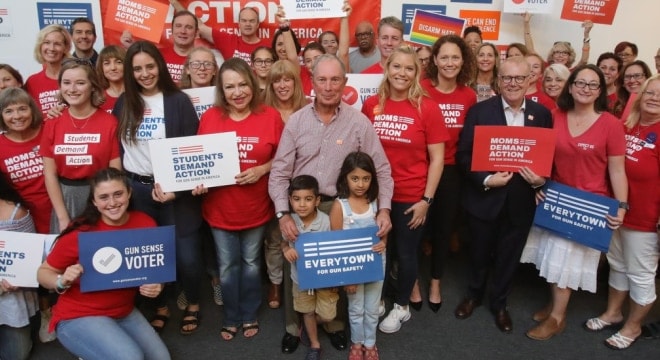 The group, which has already endorsed incumbent Democrat Governors Andrew Cuomo in New York and Gina Raimondo in Rhode Island, announced Monday that they will be spending as much as $10 million in targeted races in Georgia, Michigan, Nevada, and New Mexico.

Among those Democrats — there are no Republicans or Independents– backed by the group are gubernatorial candidates Stacey Abrams in Georgia, Gretchen Whitmer in Michigan, Nevada’s Steve Sisolak, and Michelle Lujan Grisham in New Mexico. All of the endorsed candidates have run on strong anti-gun platforms to include expanded background checks, waiting periods, and bans on some semi-auto firearms and bump stocks. Sisolak has even gone so far as to promise to work for a ban on suppressors.

Gun violence has taken too many lives, including the 58 lost on 1 October. As governor I will stand up to the @NRA & enact commonsense reforms like enforcing background checks & banning assault weapons, bump stocks, high capacity magazines & silencers #EnoughisEnough #VegasStrong pic.twitter.com/RejAYzLh3Y

The $10 million promised is beyond the $1.2 million already spent by the group to secure the Democratic primary for Lucy McBath in Georgia’s 6th Congressional District. McBath has been a senior leader for Everytown and Moms Demand Action for the past half-decade following the high-profile murder of her son and the group has promised to fuel her drive for Washington.

Besides funding ads in support of their endorsed candidates, the group says they are ready to lend feet on the ground as well.

Bloomberg, with a net worth of $52.1 billion according to Forbes, has also pledged $80 million this year in an effort to help Democrats take over the House through his Independence USA PAC.

On the other side of the spectrum, the National Rifle Association has been involved in a number of campaigns at the federal level, including a six-figure TV ad campaign against U.S. Sen. Jon Tester, a Montana Dem seen as being in trouble, and a similar effort against West Virginia’s Joe Manchin. Playing the long game, the pro-gun group has also spent over $1 million advocating to put Judge Brett Kavanaugh on the Supreme Court.