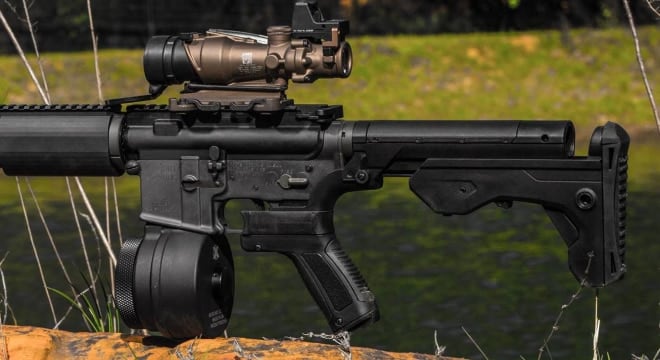 A federal judge this week threw out a class action lawsuit filed by survivors of the Route 91 Harvest shooting against a company whose product was used by the killer.

Chief Judge Gloria M. Navarro on Monday found that the plaintiffs in the case failed to demonstrate how the Texas-based Slide Fire Solutions was liable for the deaths of 58 people and injuries of some 850 others.

“Unlike cable gun locks, sights, and compensators—without which a rifle is fully functional—a rifle cannot operate as a rifle without a stock,” said Navarro in her ruling before going on to note as significant that, “bump stocks replace existing stocks rendering them component parts, even if they are after-market enhancements.”

Slide Fire, a federal firearms license holder, sought to toss out the case in part with an argument that the Protection of Lawful Commerce in Arms Act, which insulates the gun industry from lawsuits based on the actions of third parties with their product, applied to their stocks. With that, the court took up the question of if a bump stock was a “qualified product” under PLCAA.  To qualify, it had to be an integral component part that the firearm could not function without — which would be protected — rather than a mere firearm accessory, which would not.

For their part, attorneys for the Brady Campaign, who brought the legal action, argued that bump fire stocks were akin to unregulated automatic weapons and that the devices, which were billed by the manufacturer to the ATF as ideal for use by those with physical disabilities, were instead marketed as weapons of war. “Slide Fire does not market to the disabled, but to civilians— like the Las Vegas killer— who want automatic firepower,” the group wrote in their reply to the company’s motion to dismiss.

In her ruling, Navarro said that the Brady effort did not make its case that the “device’s utility to those with disabilities impacts whether that device constitutes a firearm or firearm part,” and did not affect the PLACCA determination.

It remains to be seen how the ruling will impact Slide Fire. Faced with mounting legal issues, a large chunk of their capital frozen and weathering a storm of sudden controversy, the Texas-based company shut down their website earlier this year and announced they would no longer accept orders moving forward. At least eight states have banned bump stocks and assorted other devices in the past year while a myriad of possible regulatory and legislative steps to outlaw the devices are underway in Washington.

Navarro’s dismissal order allows for a refiling with an amended complaint within 21 days.