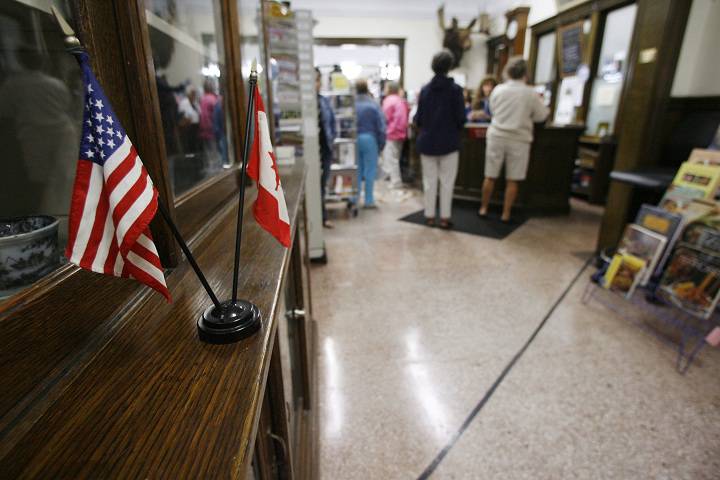 A black line on the floor marks the international border between the United States and Canada in the library at the Haskell Free Library and Opera House in Derby Line, Vt., Friday, June 22, 2007.  (Photo: Toby Talbot/ AP)

A Quebec man faces four years in prison for smuggling more than 100 handguns across the U.S.-Canadian border.

According to court documents, Vlachos and his co-conspirators, Annette Wexler and Jamie Ruiz, concocted a plan for  trafficking 104 handguns into Canada by way of the Haskell Free Library — which straddles the border between Vermont and Quebec — between July 2010 and April 2011.

Wexler and Ruiz bought the firearms on multiple separate occasions from dealers in Tampa with money from Vlachos, according to the indictment, lying on federal gun background check forms for each transaction. Ruiz and Wexler then returned to Derby Line, Vermont and left the weapons inside a backpack hidden in the library’s bathroom. Vlachos retrieved the handguns from the library and re-sold them inside Quebec, according to investigators.

“Because Canadian and U.S. law enforcement agencies joined forces to conduct a thorough investigation and secure this conviction, a dangerous gun trafficker with a long criminal history is off the street and innocent Canadians and Americans are safer,” U.S. Attorney Christina E. Nolan said.

Federal investigators arrested Vlachos in 2014, but spent more than two years extraditing him back into the U.S. to face a judge.

“Homeland Security Investigations is proud to stand with our domestic and foreign law enforcement partners in stemming the flow of cross-border arms trafficking,” said Peter C. Fitzhugh Special Agent in Charge, Homeland Security Investigations (HSI) Boston. “This investigation and the resulting prison sentence should be a clear indication of HSI’s commitment to disrupting and dismantling Transnational Criminal Organizations, both domestic and abroad.”

Wexler received a punishment of time served plus two years of supervised release for her involvement, according to the Department of Justice. Ruiz died before facing smuggling and conspiracy charges in court. Vlachos will receive credit for the 43 months he spent in police custody in Canada and the U.S. during the extradition process, according to the Canadian Free Press.