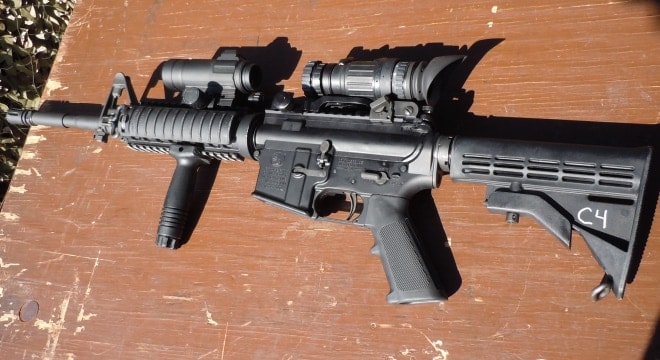 The $57.72 million firm-fixed-price contract announced by the U.S. Army on Thursday covers delivery of up to 10,000 M4 and M4A1 5.56mm carbine rifles. The award, issued through the Defense Security Cooperation Agency’s Foreign Military Sales program, is for guns intended for Jordan, Morocco, Afghanistan, Senegal, Tunisia, and Pakistan.

Self-defense weapons sold through the program are considered to be a “fundamental tool of U.S. foreign policy,” and can be either funded by the receiving country or the U.S. government as aid. The Pentagon essentially acts as the go-between for industry and the foreign customer looking for materials. DSCA head, Lt. Gen. Charles Hooper, said that so far this year sales are booming with $46.9 billion in weapons sales to foreign partners and allies in the first half of 2018 alone.

The M4 contract has an estimated completion date of Sept. 20, 2019, and Colt will perform the work at their West Hartford plant. The company markets a variety of semi-auto M4  and M4A1 carbines commercially as well as select-fire variants to law enforcement and military end-users.

In related news, on July 13, the U.S. Army Contracting Command issued a $28.4 million firm-fixed-price contract for an undetailed quantity of “North Atlantic Treaty Organization commercial off-the-shelf carbines,” with Colt, Daniel Defense, and FN competing with Remington to fulfill the order by July 2019.