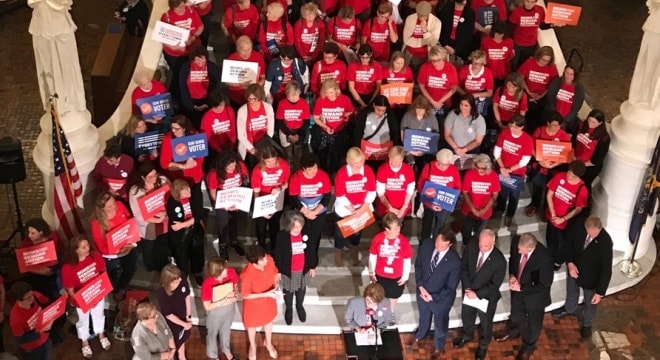 Lawmakers this week passed a measure decried by gun rights advocates that requires those subject to a protective order to turn in their guns within 24 hours.

The measure, HB 2060, was approved 131-62 by the Pennsylvania House on Wednesday, setting it up for further review by the Senate who passed a similar bill in March. Although backed by gun control advocates and urban Democrats, the bill’s backers pledged the move would not trample on the Second Amendment.

“Despite claims to the contrary, this legislation does not take firearms away from responsible gun owners,” said state Rep. Marguerite Quinn, R-Bucks, who sponsored the proposal. “The legislation will, when enacted, take firearms out of the hands of those who have received due process, and are deemed by the court to be violent and a threat.”

Under Quinn’s bill, those subject to a misdemeanor domestic violence conviction or a final Protection From Abuse order would be ordered by a judge to relinquish their guns and ammunition to police or a gun shop within 24 hours of a hearing. Current law, which allows more judicial discretion on ordering surrenders, grants a 60-day window and the ability for those subject to such surrender orders to give their arms to a third-party, such as a friend or family member, to hold.

Gun rights advocates have blasted HB 2060, arguing that as many as 40,000 temporary PFAs are issued each year and relatively few translate to permanent orders, which can last as long as three years. In testimony to lawmakers, a Second Amendment attorney cited a case where an individual was initially required to pay the Cambria County Sheriff over $1200 for gun storage over an emergency order which was later found to be filed for vindictive purposes. Worse, they argue that, under current laws on surplus items, police could sell guns stored after a year and keep the money.

The legislation, advocated by Democratic Gov. Tom Wolf, was strongly backed by CeaseFire PA as well as groups under the Bloomberg umbrella– Moms Demand Action and Everytown– with the latter holding five rallies on the bill over the summer and filling the halls of the state house for days prior to the vote this week.

So proud of our Pennsylvania @MomsDemand volunteers who are back at their statehouse for day THREE of advocating for #HB2060! It's time to #ProtectPAFamilies. #PaPolitics pic.twitter.com/Po3FLiMB2H