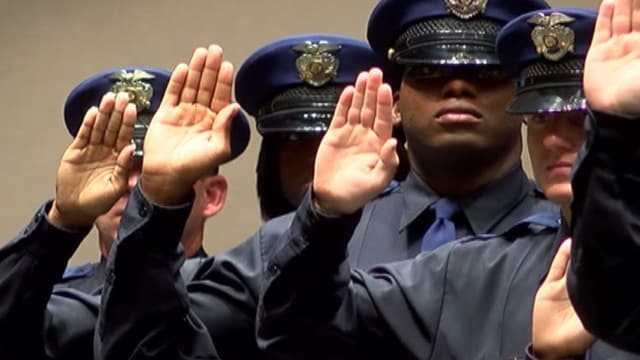 The Department of Justice touted the Alabama city as a shining example of Attorney General Jeff Sessions’s Public Safety Partnership — a program bringing law enforcement and public agencies together to combat crime and address the systemic causes of violence.

“For PSP to work would require a significant effort by the mayor’s office, US Attorney’s Office, local, state and federal agencies in planning and implementation,” said Theron Bowman, program site liaison and former police chief in Arlington, Texas. “The US Attorney’s Office put forth an incredible effort. It’s the glue for everything that’s happening and the partnerships being formed.”

PSP came about as an answer to President Donald Trump’s February 2017 executive order on reducing violent crime across the country — and Birmingham seemed liked a good place to start, the department said. At the time, the city ranked the third most violent in the country, leaping up from fifth in less than year. Law enforcement recorded 79 homicides, 159 rapes, more than 1,100 robberies and nearly 2,400 aggravated assaults in 2015 alone.

“People in Birmingham were largely suspicious of law enforcement, and frustrated by the lack of progress in lowering crime rates,” Bowman said.

“When I met Mayor Woodfin, our political backgrounds didn’t align, but we stood shoulder to shoulder in our desire to reduce violent crime in Birmingham,” Town said. “The partnership is breaking down barriers, and that’s critical. We’ve had a lot of challenges due to turnover [in the city’s leadership], and we’ve had to convince everyone we’re trying to help.”

Law enforcement officials employed a somewhat simple strategy: secure federal convictions for the city’s most violent, repeat criminals and keep them off the streets for far longer, discouraging others from taking their place.

“At the end of the day, you want to incarcerate as few people as possible, but the right ones, the true criminal elements that are driving crime,” said Birmingham Police Department Captain Scott Praytor. “It could be four or five people, but if you get the right ones, the others fall away. As we begin to roll out PSP, it’s the people around the bad players who are beginning to notice it.”

Statistics suggest the method works, according to the DOJ. In 2018, homicides and assaults declined 12 percent and 13 percent, respectively, while non-fatal shootings decreased by nearly half. Arrests and charges for violent crimes increased 40 percent, with the U.S. Attorney’s Office reporting a 94 percent conviction rate — the highest in more than a decade.

Likewise, firearms prosecutions jumped 36 percent. Investigative collaboration between the Bureau of Alcohol, Tobacco, Firearms and Explosives and local law enforcement agencies culminated in the arrests of 71 perpetrators and the seizure of more than 160 guns in May and June, alone.

“We need all the tools in the toolbox – that’s the value of PSP. We’ve never seen our federal partners move so quickly,” Praytor said. “The more intel you have, the better you can combat crime.”

“This is joint work that has resulted in large investigations that have showed us that most crime guns in Birmingham can be traced to short-time sales made within the past year. That’s critical,” he said. “And whereas the BPD hadn’t received extensive briefings on the work of federal offices in the city before, now we’re sharing information better and connecting staff. PSP is the genesis of that, the buy-in to gun crime intelligence.”

The ATF believes in NIBIN so much, in fact, the agency partnered with the Office of Justice Programs’ Bureau of Justice Assistance to award other cities with surging crime rates $5 million in grants to improve crime gun sharing technology. Indianapolis, Tulsa, Memphis, Baton Rouge — all cities participating in PSP — will receive funding, as well as Detroit, Albuquerque and San Francisco.

Nationwide, federal data suggests 2018 could be the DOJ’s busiest year ever in more than a decade for weapons prosecutions.

Through Sessions’s own crime-fighting task force, prosecutions for drug crimes, gang violence and gun violations hit historic highs, increasing 8 percent over 2016. Prosecutions for unlawful possession of a firearm — mostly by convicted felons — spiked 23 percent in the second quarter of 2017 alone.