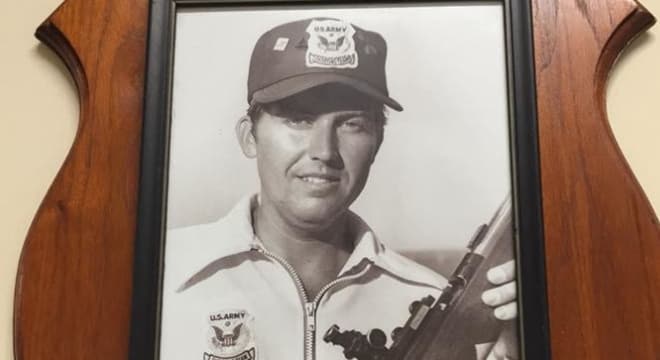 Vande Zande’s skill with a rifle earned him a reputation as “the human benchrest.” (Photo: USAMU)

With over 200 national records in his competition shooting career, “the human benchrest,” U.S. Army Maj. Ernie Vande Zande has passed away.

Vande Zande, who was the Team Leader for the United States Olympic Shooting Team in 1996, died on Sept. 29 at age 70, as reported the American Smallbore Shooting Association.

Born in 1948 in McCook, Nebraska, Vande Zande started shooting after a challenge from schoolmate at age 11 and by 1967 was a member of the team that won the National Junior Indoor Rifle Team Championship. He then attended Murray State University in Kentucky on a rifle scholarship where he rose to team captain in 1970.

Joining the U.S. Army as an ordnance officer, he was on the Army’s Marksmanship Unit off and on until 1981 when he left active service, although he continued to compete on the Army Reserve’s shooting team until he retired from the military in 1994, achieving a reputation as “the human benchrest.”

As noted by USA Shooting, Vande Zande counted at least “36 team and individual championships and set more than 200 national records in shooting,” that included a gold medal in rifle in the 1975 Pan American Games followed by a gold and two silvers in the 1979 Pan American Games. In 1984, he reportedly missed qualifying for the U.S. Olympic Team by just four-tenths of a point.

In later years, he continued as a coach and author on precision shooting and remained active in U.S. shooting teams, named as Chair of the Lones Wigger legacy project by USA Shooting last year.

Olympian Lanny Bassham, who won a gold medal small-bore rifle in the 1976 Montreal Olympics, and a silver in the 1972 Munich Olympics, memorialized Vande Zande on social media as did 10.9.com and Eley USA with the latter saying, “The shooting community lost a great member this morning.”