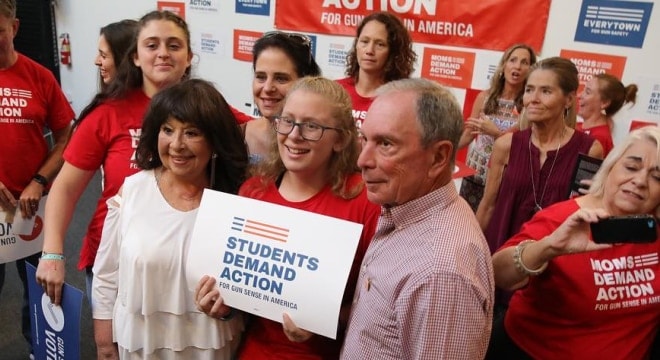 Bloomberg announced this week he is writing more checks in the hope of turning Congress blue in November. (Photo: Mike Bloomberg.com)

Billionaire philanthropist and gun control advocate Michael Bloomberg announced this week he is funding a move to switch the polarity of the U.S. Senate from Republican to Democrat.

Bloomberg, who founded Mayors Against Illegal Guns in 2006 before it morphed into Everytown in 2014, told the Washington Post he is chipping in some $20 million to the Senate Majority PAC with the hope that Dems could flip the chamber. “Congress has failed us on issue after issue. It’s time for new leadership,” he said.

The Senate Majority PAC, whose action statement said they are “Solely dedicated to building a Democratic majority in the U.S. Senate,” is funded largely through donations from the likes of hedge fund manager Donald Sussman, the Soros family, Newsweb Corp President Fred Eychaner and filmmaker Seth MacFarlane. The group has been heavily involved in digital advertising campaigns against GOP Senate candidates across Florida, Arizona, Missouri, Indiana and North Dakota focused on “motivating and mobilizing African-American, Latinx and younger voters to show up at the polls this fall.”

The $20 million from Bloomberg comes in addition to $80 million he pledged earlier this year to help Democrats win the House and at least $10 million given to Everytown for a similar effort tailored to help buttress “gun sense candidates” to include some long-term staffers attempting to move into Congress.

Addressing a group of Everytown advocates in Georgia in August, Bloomberg spoke of a turning point in the national conversation on guns. “The truth is: The American people have always favored common-sense gun regulations – but that wasn’t enough. We needed Americans to demand action – and to put in the time and energy to achieve it,” he said. “That’s what Moms Demand Action and Everytown for Gun Safety have been doing for the past five years, and together, we’ve shown that the NRA is not invincible. Far from it.”