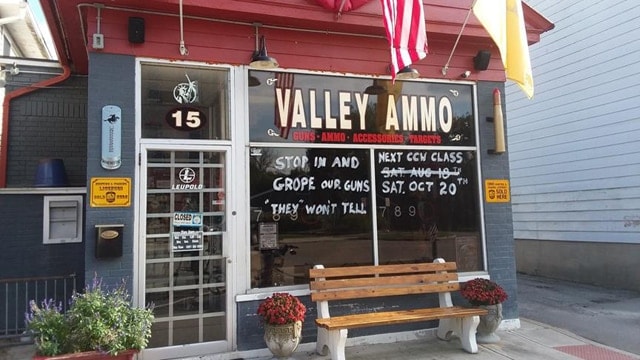 A Dayton Daily News reader took this photo of Valley Ammo in Spring Valley Monday. The sign has raised some eye brows, but others find it humorous. (Photo: WHIOTV 7)

A gun shop near in Ohio wrote an eye-catching message on its front window for customers this week: “Stop in and grope our guns. They won’t tell.”

Valley Ammo, a federally licensed dealer 20 miles southeast of Dayton, attracted media attention Tuesday for its tongue-and-cheek advertising strategy, though owner and manager John Ward declined to comment to local news outlets about the context of the message.

On its Facebook page, Valley Ammo asked followers to weigh-in on the coverage and received mostly positive comments, applauding the store’s sense of humor.

“I was a victim,” Sherry Laurens said in response to Johnson’s comment. “Notice the word WAS!!! Not disrespectful at all. This world needs some humor in it.”

The message comes amidst a week-long FBI investigation into decades-old sexual assault allegations against Supreme Court nominee Judge Brett Kavanaugh. His accuser, Dr. Christine Blasey Ford, testified before the Senate Judiciary Committee on Thursday, alleging Kavanaugh pinned her on a bed and attempted to rape her at a drunken high school party in the early 1980s.

Kavanaugh denies the incident ever happened, chastising congressional Democrats for deploying character assassination and stall tactics in an effort to prevent his confirmation from moving forward. Republican leaders have indicated a vote will likely occur after the FBI probe wraps up later this week.