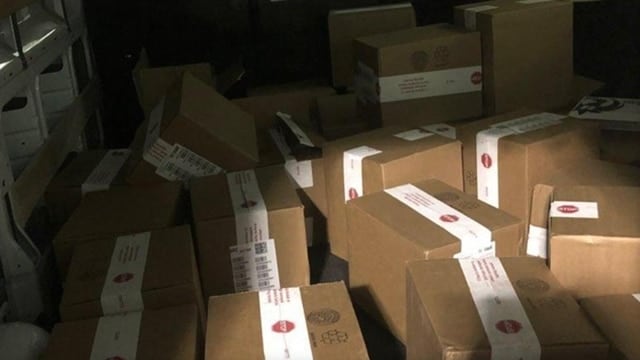 Police broke into this U-Haul van in Midlothian to seize a cache of guns. (Photo: CBS Chicago)

Law enforcement in Midlothian, Illinois arrested a second man in connection with a massive gun heist from a United Parcel Service in Memphis over the weekend.

Roland Jackson, 24, faces federal charges after he and 18-year-old Taveyan Turnbo stole some 367 Ruger handguns from the shipping company early Sunday morning. Surveillance cameras and employees witnessed the two men load three pallets — containing .22-caliber and .380-caliber pistols — into the back of a U-Haul before speeding off.

The Bureau of Alcohol, Tobacco, Firearms and Explosives said tracking the guns taken during heist — one of the largest its ever investigated — would prove trickier than a typical gun store burglary. The pallets, 16 in total, arrived Sunday in Memphis direct from Ruger’s North Carolina factory and were bound for Dallas the following day, according to a report from CBS News.

Just 12 hours after the guns disappeared, however, police some 500 miles away in the Chicago suburb of Midlothian responded to a call about suspicious activity in a store parking lot. There, officers encountered Jackson and Turnbo inside the U-Haul, though court documents state both men escaped questioning on foot and eluded capture for more than three hours.

Police recovered all but three of the stolen gun inside the U-Haul, according to court filings. Turnbo told investigators he and Jackson sold three of the handguns for about $400, though he denied participating in the Memphis heist.