The BG-AK Battlegrip is made exclusively for true AK-patterned rifles. (Photo: TangoDown)

TangoDown heeded the call for an AK style rifle grip, announcing the launch of the new BG-AK Battlegrip. The company said several years ago it designed and manufactured an AK grip for a small company in Arizona. When that brand folded, TangoDown said it received an influx of requests for the grip which was similar to TangoDown’s BG-16, an AR-15 style battlegrip. 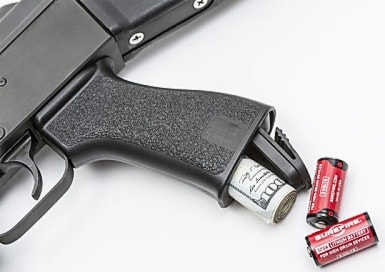 “As the creators of the AK grip, we made the decision to join forces with the company that received all of the AK product tooling after the start-up’s demise,” TangoDown said in a press release. “Once again, we are proud to produce the original grip, from the original designers, and from the original molds.”

Made of the same material as TangoDown’s entire Battlegrip series, the AG-AK delivers better ergonomics than traditional grips, an aggressive non-slip texture and internal storage for spare parts or batteries. The BG-AK fits all true AK-47 platform rifles and is also an American made product.