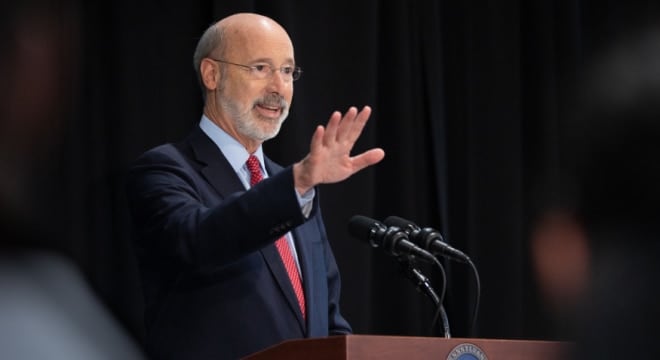 In addition to the bill signed last week, Wolf called for a law to require background checks on private transfers of some semi-automatic firearms such as AR-15s (Photo: Wolf’s office)

Wolf, a Democrat who has been poorly received by pro-Second Amendment groups while in office, signed HB 2060 into law on Friday. The bill, approved by lawmakers earlier this month, steps up the requirements for the mandatory surrender of guns in some domestic situations.

“Today Pennsylvania is taking a long-overdue step forward to keep guns from abusers and honor all the victims of domestic violence that have lost their lives at the hands of their abuser with a firearm,” Wolf said, going on to thank the “hundreds of advocates and everyday citizens that made their voices heard and got this bill to my desk.”

While applauding the action by Wolf in a separate statement, Everytown went on to announce a $500,000 ad campaign in support of his bid to stay in office another term.

“The people of Pennsylvania deserve leaders with the courage to buck the NRA and champion common-sense gun laws,” said John Feinblatt, President of Everytown for Gun Safety.

Besides HB 2060, which mandates that those subject to a misdemeanor domestic violence conviction or a final Protection From Abuse order relinquish their guns and ammunition to police or a gun shop within 24 hours of a hearing, Wolf last week called for a law to require background checks on private transfers of some semi-automatic firearms such as AR-15s saying, “The legislature’s work on gun safety remains incomplete.”

Facing Republican challenger Scott Wagner, who has the solid endorsement of the NRA, poll aggregators have Wolf with a significant lead heading into next month’s election.

I just signed into law long-overdue reforms to keep guns away from domestic abusers.

I want to personally thank the hundreds of advocates and citizens that made their voices heard and got this bill to my desk.

This important legislation will make Pennsylvania a safer place. pic.twitter.com/PUPsett0Cl