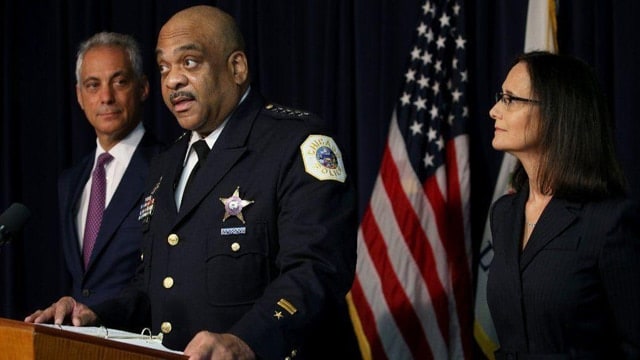 Attorney General Jeff Sessions said Friday the “constitutional duty” of public safety “rests primarily” with local law enforcement — whom he describes as a collection of “our finest citizens” whose authority shouldn’t be usurped on account of a few bad actors.

“There is one government institution, and one alone, that has the ability to make Chicago safer — that is the Chicago Police Department,” he said. “Our goal should be to empower it to fulfill its duties, not to restrict its proper functioning or excessively demean the entire Department for the errors of a few. Make no mistake: unjustified restrictions on proper policing and disrespect for our officers directly led to this tragic murder surge in Chicago.”

The written comment period on the city’s proposed consent decree expired Friday, with police unions and reform activists filing lengthy briefs arguing the merits of the controversial policies contained within. One of the suggested reforms forces officers to notify dispatchers every time they point a gun at someone and document such instances in city records, while another bans officers from driving people through dangerous neighborhoods. It’s still unclear who will monitor the department’s compliance with the consent decree, according to court documents.

The legal battle first began in 2015 after federal courts ordered the release of dash camera footage showing a Chicago police officer gunning down 17-year-old Laquan McDonald the year before, seemingly unprovoked. The footage sparked protests across the city over perceived racial bias and a dangerous “cover-up culture” within the department. On Oct. 5, a jury convicted the officer in question of second degree murder and 16 counts of aggravated assault — one for every bullet pumped into the teen’s body.

After the dash cam footage first circulated, however, Mayor Rahm Emmanuel resisted federal intrusion into CPD practices. Some critics argue he only backed a DOJ investigation and later Illinois Attorney General Lisa Madigan’s lawsuit — filed in August 2017 — against the city demanding the consent decree after political pressure mounted against him.

The American Civil Liberties Union of Chicago, one of the activist groups involved in the ongoing litigation, criticized Sessions’s statements Friday as politically-motivated and tone deaf.

“The Trump Administration and Sessions’ Department of Justice have never attempted to learn about the problems in Chicago or what reform is necessary,” said Karen Sheley, director of ACLU’s Police Practices Project. “Instead of addressing these pressing concerns when he came into office … They walked away from police reform in Chicago.”

The administration, however, blames interim reforms established through a 2015 legal settlement with the ACLU for spiking the city’s murder rate nearly 69 percent in 2016 — including abandoning “stop-and-frisk” procedures deemed by critics unconstitutional and racist.

Arrests declined in the city 24 percent between 2015 and 2016, according to the DOJ. Meanwhile, murder rates ballooned, accounting for nearly one quarter of the nationwide increase in homicides in 2016. The department said more murders occurred in Chicago that year than in New York and Los Angeles combined, despite a population of just one-fifth of the size of both cities.

He said restraining police from “using lawfully established policies of community engagement” — as he claims the proposed consent degree would do — will only worsen crime rates. “There must never be another consent decree that continues the folly of the ACLU settlement,” he said.

Sessions’s comments fall in line with the DOJ’s tactics for increasing federal firearms prosecutions and reducing violent crimes across the nation’s most dangerous cities. Through partnerships with local and state law enforcement agencies, the DOJ touts double-digit decreases in violent crimes in Memphis, Birmingham, Montgomery and Mobile over the last 18 months.

The Bureau of Alcohol, Tobacco, Firearms and Explosives will likewise assign five “violent crime coordinators” to Lausch’s Project Safe Neighborhoods team who will assist in daily reviews of firearm arrests and seizures.

The two teams join the city’s Crime Gun Strike Force, a permanent coalition of federal, state and local investigators and researchers dedicated to capturing and prosecuting Chicago’s most dangerous offenders. In the 18 months since Sessions implemented the strike force, ATF firearm arrests increased nearly 25 percent and seizures and recoveries spiked 46 percent. CPD boosted its own seizures by more than 11 percent and violent crime in all four police districts working with the strike force declined double digits — including a 49 percent decrease in murders in the Seventh District and a 37 percent decrease in shootings in the Ninth District.

The DOJ said the consent decree would hamstring the Chicago Superintendent of Police, turn over budgetary control of the department to federal courts and the undecided monitor and fails to establish concrete metrics for the department to achieve.

In its statement of interest, the department “asks the court not to enter the Proposed Consent Decree but, rather, to allow state and local officials—and Chicago’s brave front-line police officers—to engage in flexible and localized efforts to advance the goal of safe, effective, and constitutional policing in Chicago.”

The Chicago Fraternal Order of Police said last month the consent decree ignores the reality of the city’s struggle with violent crime and supports only the political agenda of “anti-police” groups like Black Lives Matter and the ACLU.

“The City and the Attorney General have set a dangerous precedent by granting groups like these influence in police policy making,” said President Kevin Graham. “Their willingness to do so reveals much about the real nature of this agreement and the magnitude of the threat it imposes.”

A hearing on the consent decree — which will allow for public commentary — is scheduled for later this month, according to court filings.