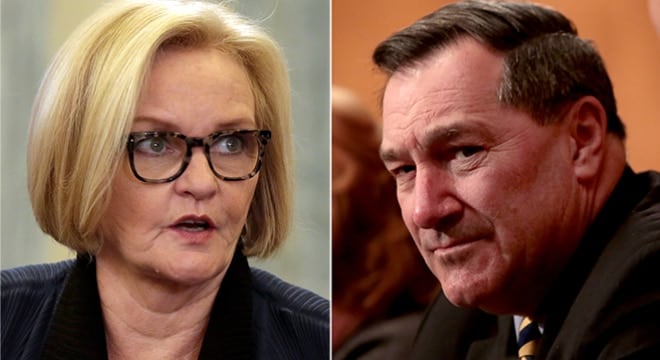 Democrats Claire McCaskill of Missouri and Joe Donnelly of Indiana are in races considered a toss-up against Republican opponents who are in turn endorsed and backed by gun rights advocates. (Photo: Composite)

McCaskill and Donnelly, both blue senators hailing from states that President Donald Trump won in 2016, are incumbents waging campaigns against well-funded Republicans to keep their seats in Washington. When it comes to gun policy, neither are endorsed by Giffords or Everytown while both are panned by the NRA for their position on how the Second Amendment should be interpreted.

On Trump’s Supreme Court nominees, both voted against Judge Brett Kavanaugh while McCaskill also voted against Judge Neil Gorsuch. Donnelly was one of four Dems who supported Gorsuch’s confirmation last year. Neither has signed on to support the Senate version of a rebooted federal assault weapons ban but they both stand by the bipartisan FixNICS bill. McCaskill is one of 41 Democrats that support Sen. Dianne Feinstein’s bump stock ban.

While the incumbent Democrats make points to include support for veterans, a strong national defense, the economy and combating the opioid epidemic on their campaign sites, they shy away from openly advocating gun control policies or bans. In comparison, Elizabeth Warren and Chris Murphy, Dems from blue states running for reelection, both advocate strengthening federal gun laws as a bedrock priority.

The NRA has endorsed McCaskill’s GOP opponent, Josh Hawley, and is funding a seven-figure campaign against the Democrat.

An ad against her funded by the group targets McCaskill, “F” rated by the group, over her votes against Trump’s Supreme Court picks.

When it comes to “D” rated Donnelly, the NRA went much the same, citing his “no” vote on Kavanaugh earlier this month as a prime reason why “After 12 years in Washington, D-C Joe has gotta go.”

The pro-gun organization is backing Mike Braun for U.S. Senate in Indiana in place of Donnelly, saying he is the only candidate in this race who will defend our Second Amendment freedoms.”

Poll aggregators have both races as a statistical toss-up with just three weeks until voters head to the polls.