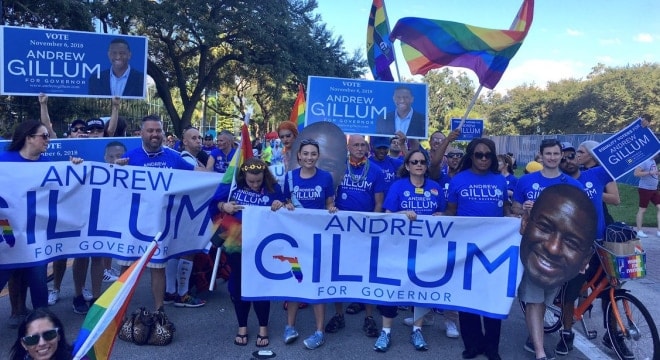 Tallahassee Mayor Andrew Gillum is the Democrat candidate for Florida’s next governor against an NRA- and President Trump-endorsed Republican (Photo: Gillum for FL)

National gun control advocates are writing checks to fund a wave of Democratic contenders for public office across the Sunshine State.

With Republicans long in control in Tallahassee, the state has often been seen as a test bed for pro-gun legislation, pioneering concealed carry laws and Stand Your Ground self-defense statutes. Anti-gun activists feel this could soon change.

“In Florida, this election is about gun safety — not political partisanship,” said John Feinblatt, president of Everytown, in a statement. “The era of the NRA calling the shots is over.”

Since the 1990s, the GOP has enjoyed control of both the legislature and the governor’s mansion to which they added the office of attorney general and agricultural commissioner in 2002. In seven of the last 10 presidential elections, the state went red.

Gillum, the Democratic front-runner for governor since August, is a progressive that advocates a ban on “assault weapons” and high-capacity magazines, implementing universal background checks, prohibiting armor-piercing bullets and taking guns from those on government terror watch lists, among other concepts. Facing NRA-endorsed Republican U.S. Rep. Ron DeSantis for the seat left open by the GOP’s term-limited Gov. Rick Scott, the race is considered a toss-up.

The contest for state’s ag commissioner, with control of issuing and maintaining some 2 million gun permits, is between lawyer-lobbyist and lifelong Democrat Nikki Fried, who is running on a pro-marijuana ticket, and NRA A-rated Republican state Rep. Matt Caldwell. Fried has made it a point that she intends to fix any lingering issues over the state’s handgun permitting system that arose earlier this year after a scandal over incomplete background checks for some applicants.

“On my first day in office, this administration will initiate a wholesale audit of the CWP department to determine the full extent of the failures, and implement new procedures and safeguards to ensure this never happens again,” promises the Democrat on her website. “The Commissioner has a public safety obligation to ensure that a thorough and complete background check is completed on every person who applies for a CWP.”

Caldwell, on the other hand, has been clear that he likes guns.

Meanwhile, in the state legislature, the Giffords group is backing a half-dozen Democrats in key Senate and House races, saying they will be “critical for our next victories in Florida.” Former U.S. Rep. Gabby Giffords, head of the group, said the state has suffered from some of the most deadly mass shootings in recent history and “despite this devastating reality, the gun lobby continues to use its cash and influence to try and stop state legislatures from passing laws to make our schools, streets, and communities safer.”

On representing Floridians in Washington, last week Bloomberg’s super PAC, Independence USA, made a $109,000 digital ad buy to back former Clinton-era Health and Human Services Secretary Donna Shalala to replace long-term Little Havana Republican Ileana Ros-Lehtinen in the U.S. House. With Ros-Lehtinen retiring, the seat is seen as one of the most vulnerable in the country to switch from red to blue.

Voters head to the polls in Florida on Nov. 6