Education Department sued over issue of funding guns in schools 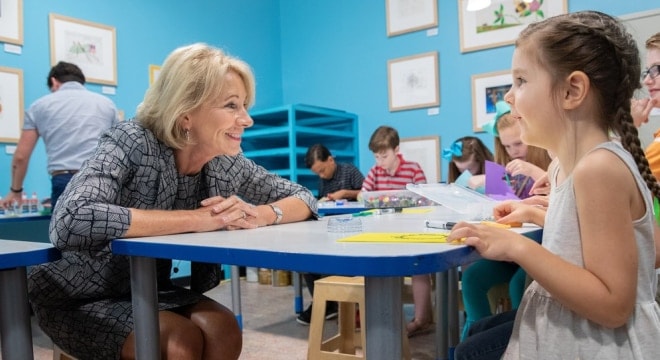 Gun control advocates filed suit against the U.S. Education Department to reveal any paper trail for plans to use federal grant money to supply schools firearms.

The Giffords Law Center, in conjunction with the American Federation of Teachers and the Southern Poverty Law Center, filed suit against the department in a D.C. federal court on Wednesday.

The groups argue that Education Secretary Betsy DeVos recently moved to green light the use by local school districts of federal grant dollars from the Student Support and Academic Enrichment Program, designed to help struggling schools, to instead purchase guns and training for teachers and faculty, an allegation DeVos denies.

The advocates want to find out what role, if any, the National Rifle Association played in the administration’s action. Also, in the past several weeks, they filed two Freedom of Information Act requests requesting communications between DeVos’s department and groups such as the National Rifle Association on SSAE grants and guns in schools. They contend the government is refusing to comply with the FOIA request, which triggered the lawsuit.

“Betsy DeVos and President Trump’s Department of Education appear content to ignore the overwhelming opposition, from law enforcement and teachers to putting guns in classrooms,” said Adam Skaggs, Giffords Law Center chief counsel. “How the administration decided to pursue this ill-advised course of action remains a mystery because they are stonewalling our request for information, but this lawsuit will force Secretary DeVos to be forthright with the American people and explain just how the Department came up with this plan.”