Competing in The Tactical Games, where ‘crossfit meets combat’ (VIDEO)

Five months ago, I found a picture on Instagram of two buff dudes wearing full-combat gear while carrying 180-pound barbells toward a shooting box. It looked more intense than your average two-gun event. After a little digging, I learned the exercise was part of an event at the new Tactical Games.

According to the event’s website, the games invite “tactical athletes” to compete for the title of “most dangerous man on earth” through a series of events where “crossfit-meets-combat.” While anyone can participate, slots are limited to 120 and the pre-screening process has a high bar as participants must demonstrate an ability to complete both fitness and shooting challenges.

Then, I noticed the second annual Tactical Games was scheduled for October at a range in Autryville, North Carolina. As a competitive shooter with some athletic ability, it looked like a fun challenge, so I signed up. 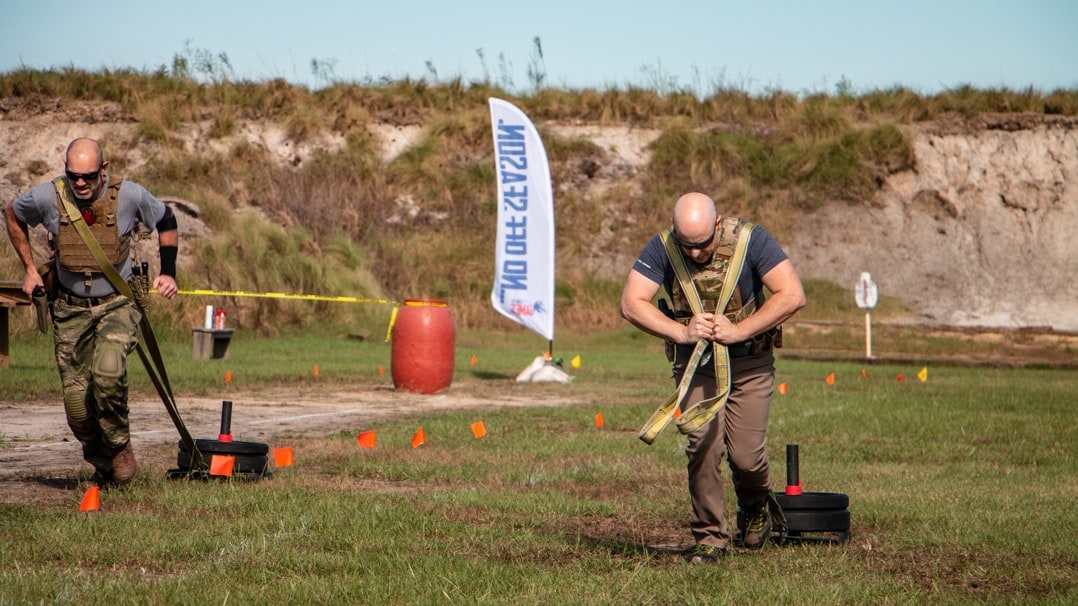 The event’s founder Tim Burke said he based the obstacles on training exercises he learned during his decades-long career in Army Special Forces and federal law enforcement. He described the inspiration for the Tactical Games traces back to 3-gun competitions and crossfit.

However, the biggest difference between the Tactical Games and a 3-gun match, Burke explained, is the amount of time spent on each exercise. “The longest (3-gun) match that I’ve ever seen was about 45 seconds … the actual shooting, when the guy goes ‘beep,’ it’s about 45 seconds. Our events might last 30 minutes. And the idea is to put the body under stress and then test the skills, technical skills, shooting skills,” he said.

Preparing for The Tactical Games

After signing up, I had 70 days to prepare. Knowing full well I wouldn’t be able to just roll out of bed and go full speed, I decided I need to put some work. For about two months, I hit the gym Monday through Friday, spending 90 minutes each session, and then ran 3-6 miles on the weekends and worked on the fundamentals of shooting. 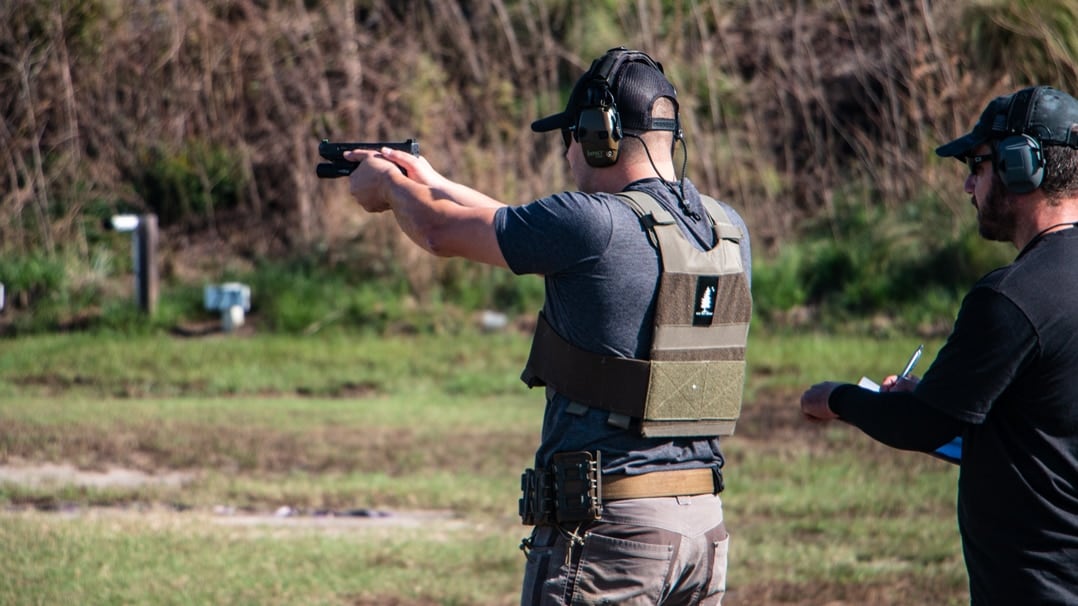 The biggest difference between the Tactical Games and a 3-gun match, Burke explained, is the amount of time spent on each exercise. (Photo: Ben Brown/Guns.com)

But another part of my preparation included selecting the right gear. The event sets parameters on what you could use. All athletes needed three key pieces of gear: a plate carrier, carbine and handgun.

Plate carriers needed to weigh a minimum of 15 pounds. Long guns could be any style and length, and could be equipped with any optic without a magnification function. And, all handguns had to run with iron sights. Also, the firearms could be chambered in any caliber, but the assumption was that .223/5.56 and 9mm would work best. 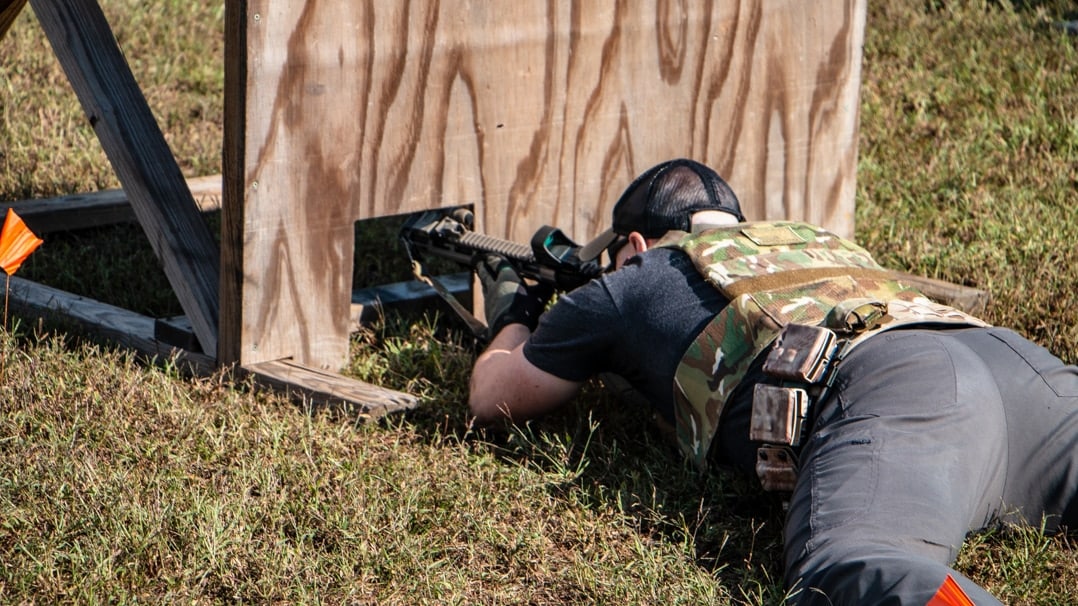 Long guns could be any style and length, and could be equipped with any optic without a magnification function.(Photo: Ben Brown/Guns.com)

For gear, I decided on the Ferro Concepts Slickster, which I have used for some time and in a number of classes. The Slickster is a minimalist option without a ton of Molle webbing and pouches. Knowing maneuverability would be a necessity, I brought my 12.5-inch barreled AR15 with an Aimpoint H-2 optic. And, for my handgun, I brought a Glock 34 with the Taran Tactical Combat Master package. The pistol rode in a Safariland ALS holster.

Some 30 competitors joined the games. Participants ranged from active military to law enforcement to civilians, but it opens up to anyone who wants to see what they’re made of. We were divided into three groups: Elite, Intermediate, and Women’s, which differed by athletic ability, ie the elite group carries more weight than the intermediate and women’s.

For two days, we were challenged with a range of obstacles that included rope climbing, weight carrying, running, and, of course, shooting. But, at the end of the day, The Tactical Games was a race and whoever finished in the least amount of time won. 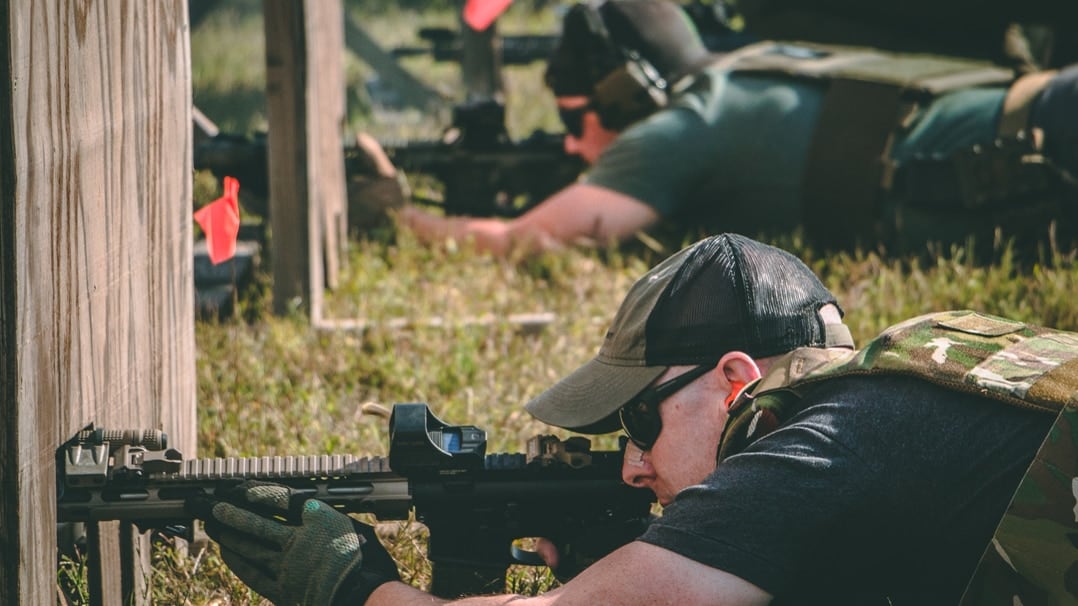 For two days, we were challenged with a range of obstacles that included rope climbing, weight carrying, running, and, of course, shooting. (Photo: Ben Brown/Guns.com)

The competition tested both athleticism and shooting skill, so you couldn’t just lift your way to victory nor could you shoot your way to victory. You needed to have both to make it happen. And, if you had both, you’d walk away with a first place trophy and a Kahr Arms Desert Eagle pistol.

While I ended up finishing first in the intermediate class, I thought the obstacles stretched both my physical and shooting abilities. In retrospect, I could have used a little more time training. In the short amount of time I had, I was probably a little too hard on my body and spent more resting between workouts. 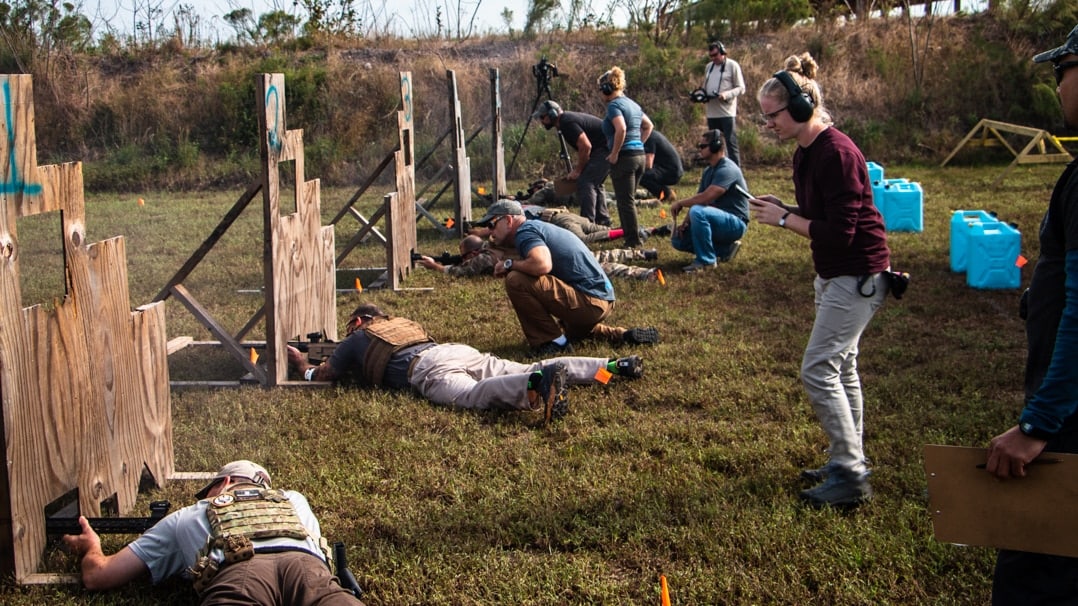 The event’s founder Tim Burke said he based the obstacles on training exercises he learned during his decades-long career in Army Special Forces and federal law enforcement. He described the inspiration for the Tactical Games traces back to 3-gun competitions and crossfit. (Photo: Ben Brown/Guns.com)

For the shooting, I think my gear selection was spot on. I didn’t think handgun shots were going to be a big issue but we did engage targets out to 50 yards. The competition sights and 3-pound trigger gave me some extra confidence when stretching out. My pistol – built for competition – performed superbly. And the holster retention was ideal given all the running and jumping.

Although the turnout was smaller than what was planned, Burke said he thinks the Tactical Games are on the right track. This year’s event garnered a host of major sponsors, including Recoil magazine, Kahr Arms, and Trigger Time TV.

“We are right now where the crossfit games were 13 years ago, so we’re just getting started, but we’re already going like this,” he said as he raised his hand as if a line climbing the Y-axis. “I think among athletes and athletes that shoot, we are going to be the biggest shooting event on the planet.” He added that people in other countries have already inquired about franchising the event.

The next Tactical Games is scheduled for Feb. 23-24 in Meridian, Mississippi.