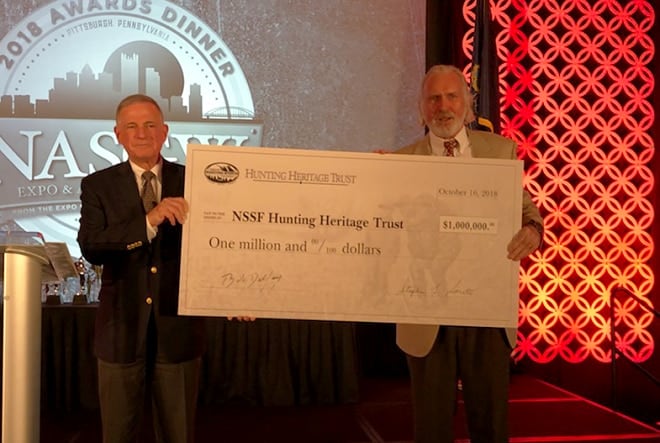 Two well-known hunting and gun industry groups have partnered in a new initiative to grow the ranks of sportsmen and target shooters.

The National Shooting Sports Foundation and Hunting Heritage Trust announced the new partnership last week at the National Association of Sporting Goods Wholesalers Expo in Pittsburgh. Each has pledged $500,000 towards a common goal of recruiting and retaining both hunters and sports shooters.

“Providing the resources to those newly interested in learning about firearms safety and the shooting sports, sparking renewed interest in those who used to hunt or shoot, and keeping up interest of those engaged in hunting and the shooting sports, is of paramount importance to our industry,” said Steve Sanetti, NSSF CEO. “The new NSSF Hunting Heritage Trust grant program provides much-needed funding for these efforts.”

The effort, to run at least a decade, will award $100,000 in grants annually beginning in 2019 to organizations seeking to recruit, retain and reactivate sportsmen.

A five-year survey by the U.S. Fish and Wildlife Service last year reported the number of hunters dropped from 12.5 million in 2006 to 11.4 million in 2016 although the general population rose by more than 30 million in the same period. This has triggered an aggressive response from Washington and, in the past two years, the administration of President Trump has designated August as National Shooting Sports Month to encourage participation in the shooting sports and emphasize firearms safety and this month proclaimed October as National Hunting and Fishing Month.

Hunting, fishing and other outdoor activities contributed more than $156 billion in economic activity in communities across the country in 2016 according to the same survey.