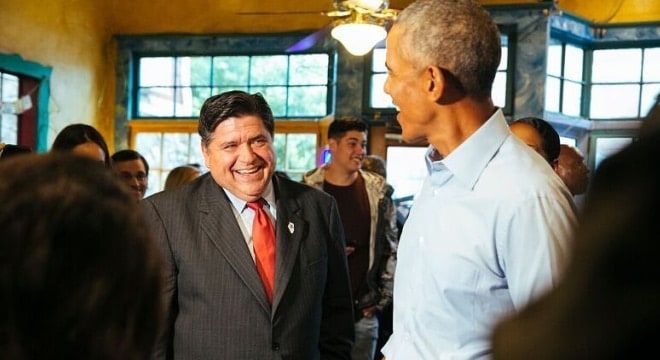 J.B. Pritzker has picked up the support of former President Obama as well as other prominent Democrats and gun control organizations in his bid to become governor in the Land of Lincoln. (Photo: J.B. Pritzker/IG)

National anti-gun advocates are firm in their support of J.B. Pritzker as the Democratic candidate for Governor of Illinois, seeing him as an important future ally in the push for more gun regulation.

Pritzker, a billionaire Hyatt Hotels heir and venture capitalist, has in the past campaigned for a U.S. House seat and pitched in on various Clinton and Obama presidential campaigns but has never held public office. He did, however, easily beat a field of more than a half-dozen gubernatorial hopefuls in the Democratic primary in March, leaving him to take on incumbent Gov. Bruce Rauner, a Republican fighting for a second term.

In addition to a progressive stance on legal marijuana, women’s’ issues and immigrant protections, Pritzker has a lengthy public plan on gun control to include universal background checks on every firearm transferred in the state, bans on “assault weapons,” high-capacity magazines, and bump stocks; stepping up the state’s input of records to the federal NICS background check system; and increasing gun crime investigations. He has also promised to sign a gun dealer licensing bill that Rauner has vetoed in the past as being duplicative.

“Without a doubt, we need common-sense and long-overdue gun safety legislation,” Pritzker wrote in an op-ed for the Chicago Sun-Times in August. “Criminals and those who want to do harm shouldn’t have access to guns, and no one should have access to weapons of war or be able to obtain guns illegally.”

The recent call has not been the first time he proposed to outlaw certain guns — in 2008 while running for Congress, he proposed a ban on handguns and once served as chairman of the advisory board of the Illinois Council Against Handgun Violence.

Pritzker’s campaign has highlighted his feelings on gun control in a spot featuring a woman named Tiffany Rice, whose 14-year-old son was murdered in 2012. “I’m supporting JB Pritzker for governor. JB’s criminal justice plan calls gun violence exactly what it is: an epidemic,” says Rice.

“We are endorsing J.B. and Juliana today because they acknowledge the heartbreak gun violence causes in their state, and they are working to stop it,” said Giffords. “Their leadership will be critical for our next victories in Illinois to prevent future tragedies.”

In addition to Giffords, Everytown and a host of local gun control organizations have given Pritzker a nod.

As for Rauner, while he has vetoed a few anti-gun bills during his time in office, he has also signed several measures vehemently opposed by the National Rifle Association including one to expand mandatory waiting periods to cover all gun sales and another to make it easier to obtain gun seizures in some domestic violence situations. Nonetheless, the Republican has a “B” rating from the gun rights group while Pritzker carries an “F.”

Polls show Pritzker with a double-digit lead over Rauner.