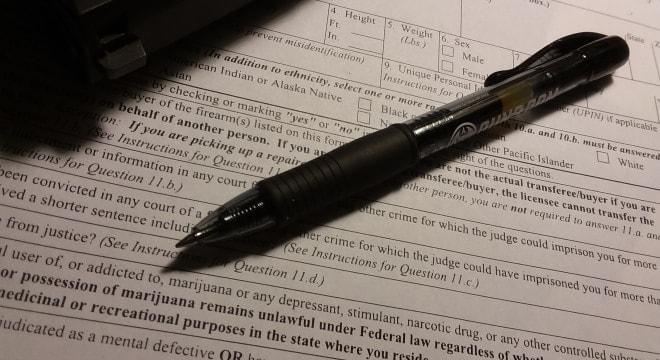 Question 11e on ATF Form 4473 gets point-blank on the matter of marijuana. (Photo: Chris Eger/Guns.com)

With marijuana increasingly legal across the country, a Republican lawmaker is looking to take federal gun regulators out of the equation.

Although marijuana is legal for adults in nines states, and as medical cannabis in 30, it remains listed as a highly-addictive and dangerous Schedule I drug with the federal government. It also shares the same designation as ecstasy, heroin, and LSD. This has resulted in the Bureau of Alcohol, Tobacco, Firearms and Explosives maintaining a status quo that any sale or possession of firearms by those who use marijuana, even if allowed by state law, remains criminal.

However, one GOP Congressman says the best way around this, for now, could be to just not ask the question. “I’ve drafted, but haven’t yet introduced, a bill to remove the marijuana question from ATF form 4473 — the question that requires anyone who uses marijuana (crime) to lie (crime) in order to purchase a gun (crime) from a gun dealer,” said U.S. Rep. Thomas Massie, R-Ky., asking on social media if, “Any Democrats who would support such a bill?”

I’ve drafted, but haven’t yet introduced, a bill to remove the marijuana question from ATF form 4473 — the question that requires anyone who uses marijuana (crime) to lie (crime) in order to purchase a gun (crime) from a gun dealer. Any Democrats who would support such a bill? https://t.co/5cAmsTPLoX

In 2016, a three-judge panel of the U.S. 9th Circuit Court of Appeals handed down a ruling that refusing gun sales to otherwise law-abiding marijuana users does not violate their Second Amendment rights, saying that the case offered little to “overcome Congress’s reasonable conclusion that the use of such drugs raises the risk of irrational or unpredictable behavior with which gun use should not be associated.”

Following that decision, the ATF released a revised version of Form 4473, explicitly warning gun buyers “the use or possession of marijuana remains unlawful under federal law regardless of whether it has been legalized or decriminalized for medicinal or recreational purposes in the state where you reside.”

Although Massie has not released the text of his proposal, it could be that it would move to change ATF policy on marijuana and gun regulation to something akin to the 1990s “Don’t ask, don’t tell” policy practiced by the Department of Defense for almost 30 years. Under DADT, the military was halted from discriminating against closeted homosexual service members or candidates, while still barring openly gay individuals from military service to comply with federal law.

In an ATF version, so long as the 4473 didn’t ask the question, and would-be gun owners who used marijuana did not disclose the latter, a gun sale could proceed. However, there would still likely be legal problems in the future in cases where, for example, a gun owner was discovered by federal authorities to be in possession of both firearms and marijuana.

Massie, a Libertarian-leaning conservative who rebooted the Second Amendment Caucus on Capitol Hill in 2016 and has since introduced a bill to lower the federal minimum age to buy a handgun to 18, has been in the forefront of relaxing gun laws in Congress. Although currently running for reelection, the incumbent is seen as a likely win over Democratic challenger Seth Hall this November.