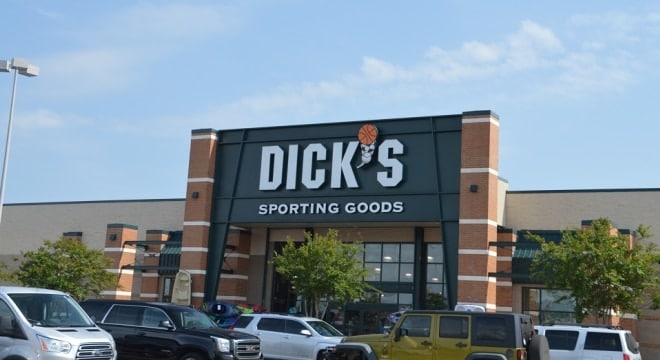 Dick’s is the target of a $5 million lawsuit from an ammo supplier who says the retailer acted fraudulently. (Photo: Chris Eger/Guns.com)

At the root of the filing is what BBM says was the failure by Dick’s to hold up their end of a contract for the ammo distributor to supply the retailer with Field & Stream-branded ammo for resale in their stores. The delay by the big box sporting goods outlet, argues the filing, resulted in BBM losing out on a multi-million dollar contract to supply helicopters to an overseas U.S. ally.

The 11-page lawsuit filed Tuesday in a Pennsylvania federal court details that the two companies entered into an agreement in January 2016 to supply ammo packaged with Dick’s trademarked Field & Stream packaging. Acting on the contract, BBM paid two ammo manufacturers — Bosnian-based Igman and Hungarian-based RUAG — a total of $4.5 million for the product and made the munitions available to Dick’s by November of the same year, a delivery timeline stipulated by the contract. However, BBM says Dick’s then left them holding the bag for almost a year, refusing to pay them or take delivery of the ammo.

The house-branded ammo, which could not be repacked and sold to another retailer due to the Field & Stream headstamp on the cartridges, was eventually accepted by Dick’s but the intervening storage, at BBM’s expense, cost the ammo distributor $200,000. Further, since BBM’s cash was tied up in the stalled deal, they could not fill a contract with Lebanon for a batch of Bell helicopters, losing out on an additional $5 million, which they are seeking to recoup from Dick’s.

The filing says the actions by Dick’s went beyond just holding up the ammo delivery.

The plaintiffs wager that the controversial sporting goods retailer was banking on a significant hike in the retail price of ammunition in late 2016 — due to the presidential election — that in the end did not materialize. Further, they argue that by stipulating the use of Dick’s house brand, ammo vendors such as BBM “had no option but to involuntarily warehouse the ammunition on Dick’s behalf until such time as Dick’s determined that demand was sufficiently high for it to manipulate retail prices.”

BBM argues Dick’s never intended to take possession of the ammo in November 2016, but rather planned to hoard their unique ammunition inventories in the warehouses of its vendors until the price and the time was right. While the Field & Stream ammo sat in BBM’s warehouse it was not counted on Dick’s inventory, therefore making it more attractive to investors, it was readily available — and warehoused at BBM’s expense — should Dick’s suddenly need it.

The ammo supplier further says Dicks failed to advertise the house-branded bullets, even over peak holiday-season sales periods, thus stalling a demand for them. Out of over 200 ammunition SKUs currently listed with the retailer, just one Field & Stream-branded item — shotgun shells — is currently listed.

The allegations by BBM are not the first time that Dick’s has been accused of market manipulation. In 2008, the company settled FTC charges on illegal market allocation relating to the retail sale of golf merchandise.

Dick’s in recent months has become a pariah in the shooting sports industry following the decision by the retailer to hire a government affairs group for the purpose of gun control lobbying, coupled with the retailer’s past choices to destroy their existing inventory of AR-15s and refuse firearm sales to those under age 21. This has led firearms icons such as Mossberg, Springfield Armory and others to severe ties with the retailer.