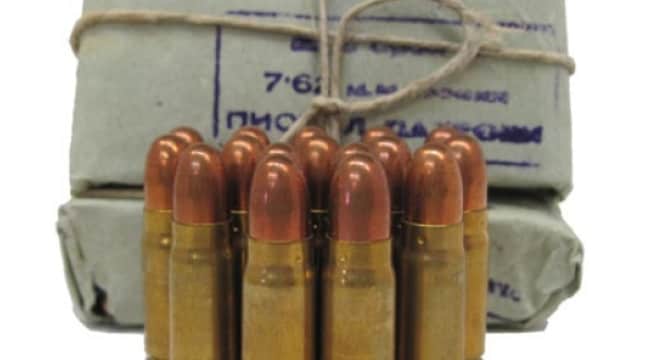 The ammo Stutler found appears to be Bulgarian-made Tokarev military surplus dating from the 1950s, such as these shown in a file image (Photo: AmmoToGo.com)

A New Hampshire man has First World problems after he stumbled across a plastic bag full of surplus ammo that nobody wants to take off his hands.

The New Hampshire Union Leader reports that James Stutler, 41, of Manchester found a plastic Ziploc bag of bullets near the driveway entrance to an area bank Tuesday morning while on his morning walk. The bag contained three brown paper packages tied up with string, each with 16 rounds of 7.62x25mm Tokarev ammo, a bottle-necked pistol cartridge developed in the Soviet Union during the 1930s that is common on the surplus market.

Looking to rid himself of the bullets, which had a $25 price tag, Stutler was in turn rebuffed by local police, Waste Management, and area gun shops, none of which would help him. Some even suggested just throwing the bullets in the trash.

“I don’t want them,” Stutler told the Union Leader, “because there’s no guns in my house.”

Developed from the Mauser 7.63x25mm round used in the C96 pistol, the most popular firearms chambered for the 7.62 Tok are the TT30/33, which was a common Warsaw Pact military sidearm in use through WWII and into the Cold War, as well as the Czech CZ 52, both of which are widely sold at comparatively inexpensive prices.

From the images published by the paper, the ammo Stutler found appears to be Bulgarian-made Tokarev rounds dating from the 1950s, which was sold in bulk in recent years.