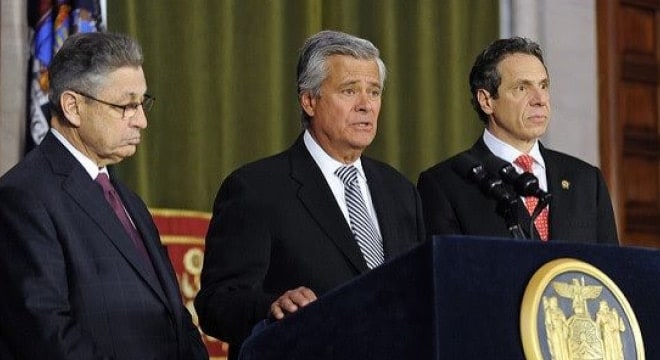 Former New York State Senate Majority Leader Dean Skelos, a key player in the adoption of gun control legislation, was sentenced Wednesday for a series of bribes and extortion payments while in office.

Skelos, who had been previously convicted on federal corruption charges in 2015 that were overturned, was again found guilty earlier this year after a second trial and this week was sentenced to 51 months in prison. According to prosecutors, he used his official position to rake in over $300,000 in bribes and extortion payments that were paid to his son, Adam, who was also hit with a 4-year sentence.

“Former State Senate Majority Leader Dean Skelos was entrusted with enormous power and responsibility, power a unanimous jury of his peers has now concluded for a second time that Skelos repeatedly abused in pursuit of illegal payments to his son, Adam Skelos,” said Deputy U.S. Attorney Robert Khuzami in a statement. “The sentences imposed today are but a small down-payment to correct the damage they did to our citizens’ faith in state government.”

A Republican who represented Long Island’s Nassau County in the state Senate from 1985 through 2015 while continuing to practice as a lawyer, Skelos served as Majority Leader of the chamber three times. It was while in that capacity, with control of the legislative calendar, he suspended the Senate’s rules in early 2013 to bring the Democrat-backed SAFE Act to the floor. Once there, he stumped for the expansive and controversial package, which had been unveiled just days after the Sandy Hook school shooting in Newtown, Connecticut, and crossed partisan lines to vote for its ultimate 43-18 passage.

Once the bill was sent to Gov. Andrew Cuomo for signature, Skelos delivered a mea culpa over what were considered by some to be “inappropriate” legislative tactics to speed the proposal through, saying just days afterward that, “As I reflect back, perhaps we did act in haste and you’ll see that there are going to be amendments to fix some of the mistakes, but I also think that that type of language is inappropriate.”

Another chief architect of the SAFE Act, former New York Assembly Speaker Sheldon Silver, was convicted in 2015 of taking $4 million in bribes and kickbacks since 2000. He was sentenced in August to 7 years in federal prison.