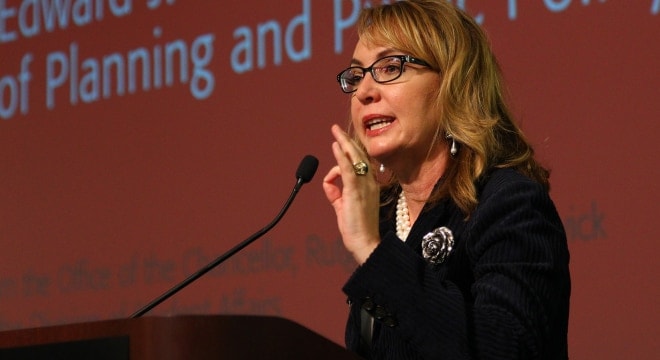 The gun control advocate was on hand Thursday in New Jersey to inaugurate the new center established to fill a perceived gap in the study of gun violence by federal public health organizations.

Former U.S. Rep. Gabby Giffords helped announce the designation of Rutgers University as New Jersey’s Center on Gun Violence Research. The goal of the center is to produce data on gun violence, which advocates contend is not conducted by the federally-funded Centers for Disease Control over political issues. The CGVR is paid for by a $2 million grant awarded through the State of New Jersey.

The center is an initiative by Rutgers’ University Behavioral Health Care and the School of Criminal Justice to study the nature of firearms violence from the perspective of the victim and perpetrator as well as larger community and societal consequences. Researchers would work with lawmakers and state agencies on an ongoing basis to identify what is characterized as “violence prevention policies and programs.”

New Jersey’s Democratic Gov. Phil Murphy and others argue the Dickey Amendment shortcut federal funding for gun research study as a health care issue. Named for former U.S. House Rep. Jay Dickey, an Arkansas Republican who backed the measure in 1996, the amendment stripped the CDC of $2.6 million it had been using on its gun violence research and has been a contentious matter ever since.

“Beginning today, New Jersey will have its very own research center to fill the knowledge gap left by the federal government’s inaction and the gun industry’s obstruction,” said Murphy, who has embraced a number of increased restrictions on guns in the state in his term in office and appointed a former Giffords lawyer as his gun control tsar.

Second Amendment groups in support of the Dickey Amendment say the CDC is only barred from gun control advocacy, and in turn point to a federally-funded paper paid for during the Obama administration that found defensive gun use was common, mass shootings were not, and most gun deaths in the country are due to suicide.

The New Jersey center is not the first to tackle the issue. Citing similar concerns over the CDC and the Dickey Amendment, California established its own research center at the University of California to study gun violence as a health care issue in 2016, while lawmakers in New York are moving forward with a similar plan.

Proud that @RutgersU is now home to New Jersey’s Center on Gun Violence Research, an effort to fill the knowledge gap left by federal inaction and the gun industry's obstruction, as we work to end the scourge of gun violence plaguing our communities. https://t.co/20Cz1RCpkI pic.twitter.com/ZjzuQlIGC3