Suspicious package count up to 10 as investigation continues 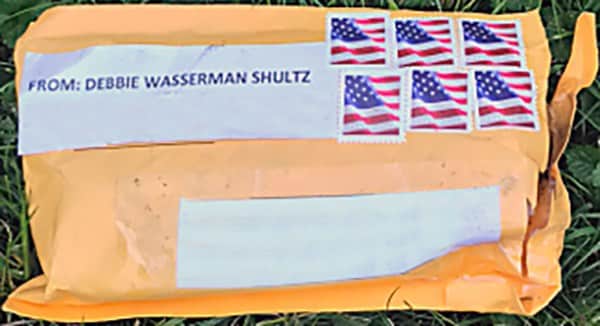 The nationwide manhunt for the person responsible for mailing nearly a dozen suspicious packages to prominent Democrats this week continues.

“This investigation is of the highest priority for the FBI,” said FBI Director Christopher Wray. “We have committed the full strength of the FBI’s resources and, together with our partners on our Joint Terrorism Task Forces, we will continue to work to identify and arrest whoever is responsible for sending these packages.”

“We ask anyone who may have information to contact the FBI. Do not hesitate to call,” Wray said. “No piece of information is too small to help us in this investigation.”

The packages all displayed a Florida return address with Congresswoman Debbie Wasserman Schultz’s name printed across the left-hand side and six postage stamps. The envelope destined for Holder was “unsuccessfully delivered” and rerouted back to the Florida address, according to the FBI.

Some experts not involved with the investigation suggest the bombs lack trigger devices and “look fake,” calling into question the true intentions of the suspect or suspects behind the attack, according to a report from the New York Times.

New York Gov. Andrew Cuomo disputed this interpretation, telling CNN “its established” the devices were “capable of denotation.” “Was that purposeful or incidental?,” he said. Was it a poorly constructed bomb?”

“At a time when there is hate and division, it doesn’t make sense to exacerbate it,” de Blasio said. “Don’t encourage violence. Don’t encourage hatred. Don’t encourage attacks on media. You can disagree, but you have to show respect for people and air your disagreements peacefully.”

CNN Worldwide President Jeff Zucker accused the White House of fanning the flames of violence through hostility toward the media. “The president and especially the White House press secretary should understand their words matter,” he said.

.@realDonaldTrump asked Americans “to come together and send one very clear, strong, unmistakable message that acts or threats of political violence of any kind have no place in the USA” Yet you chose to attack and divide. America should unite against all political violence. https://t.co/Dlo3xwHyKi