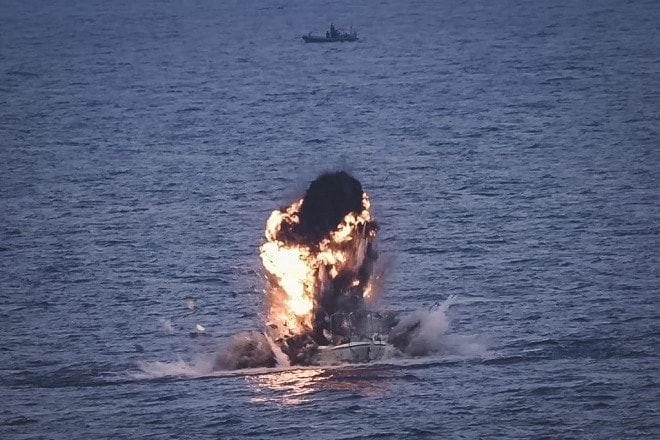 Everybody wants to be a pirate until its time to do pirate shit and they find out the merchant ship is armed. (Photo: EU NAVFOR)

A group of pirates operating off the Somali coast got more than they bargained for when they tried to attack a passing cargo ship.

Earlier this month a small vessel, described by EU Naval Forces as a whaler, approached the Hong Kong-flagged merchant ship KSL Sydney while it was offshore and opened fire on the ship’s bridge. Closing to just 15 feet of the huge bulk carrier, the whaler’s crew — four pirates armed with AK47s — tried to use hooks and ladders to board the vessel but were met by return fire from the ship’s onboard security team.

Deciding the KSL Sydney wasn’t worth the trouble, the whaler broke off and was later tracked by an EU surveillance aircraft. Locating the same whaler at a small bay on the Somali coast on Sunday, the crew from the Spanish amphibious warfare ship Castilla moved in and seized the craft, then towed it out to sea and blew it up before the pirates that used it could mount other attacks.

Piracy off the coast of Somalia peaked in 2011 with nearly 200 attacks logged but have declined significantly in recent years following a strong international naval response and the increased use of armed guards on transiting merchant vessels. Nonetheless, incidents do continue. In February, two skiffs tried to board a passing tanker but, as with the KSL Sydney, were chased off by armed onboard security.