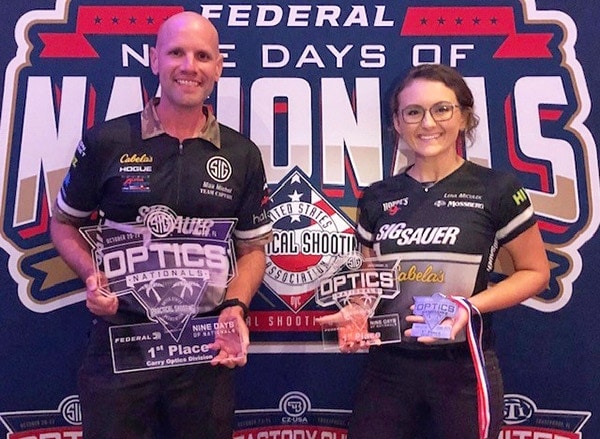 “Going into this match my goal was to keep Sig on top by defending my title in Carry Optics. I am so pleased that I was successful and continue to be the only professional shooter to ever hold a USPSA National Carry Optics title,” Michel explained in a press release. “I am proud of all that I have achieved at this point in my career, and I owe it to the support of the team I have around me, and the backing of the Sig Sauer brand and their superior products.”

“My proudest moment as a professional shooter came at this years USPSA Sig Sauer Optics Nationals,” Miculek said. “To see all the hard work pay off and become the first female to break the top five at a USPSA Nationals, in addition to winning Master Class for PCC, really motivates me to break more barriers for females in professional shooting.”

“This is an exciting time for Team Sig. Max and Lena are both competing at such high levels, and as a result of their hard work and dedication they continue to turn in dominating performances,” Taylor said. “At the USPSA Nationals they both made history and we could not be more proud of their accomplishments.”