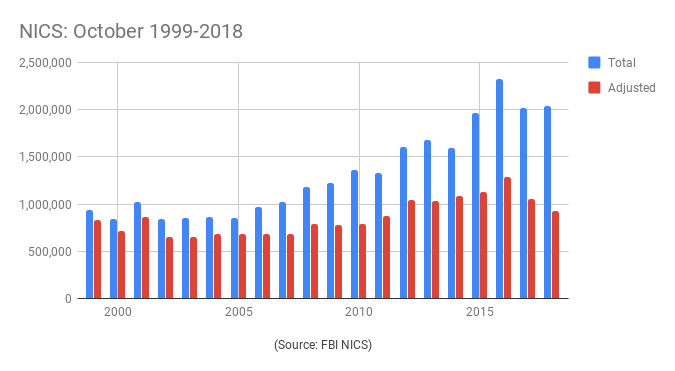 Estimated gun sales declined double digits last month, marking the slowest October since 2011, according to federal data, and continuing a pattern first established over the summer.

Dealers processed over 460,000 applications for handguns and just under 418,000 applications for long guns last month. The latter represents the slowest October recorded in a decade. Likewise, long gun tallies for July and August sank to 10-year lows, returning to levels not seen since before the election of former President Barack Obama. September fared even worse, ranking dead last in the 20-year history of NICS.

Historical patterns for the industry suggest checks and sales will hit annual highs as the holiday season nears — typically the busiest time for retailers. Publicly traded gun companies — including Smith & Wesson and Sturm, Ruger and Company — consider fall and winter months the most profitable.

The current year remains on track to rank as the second busiest for NICS checks since the FBI first began keeping records in 1998, eclipsing the first 10 months of 2017 by 5 percent. Estimated sales, however, are trailing 6 percent, according to the data.