Three vintage rifles that went missing in the aftermath of a catastrophic fire at a Washington museum have been found by area police.

The Aberdeen Police Department announced in late October that they had recovered nearly a dozen guns as a result of a search warrant carried out in an unrelated burglary case that resulted in the arrest of a 56-year old area man for Unlawful Possession of Firearms.

Three of the rifles — including what appears to be a rare Winchester-Hotchkiss and a German Mauser — were among seven missing guns that had been secured in a locker in an office at the Aberdeen Museum of History when the facility suffered a fire in June. Museum officials are grateful the rifles were recovered.

“It was a really happy day. I mean, it felt like, oh, we didn’t think, possibly, that we’d see them,” Dann Sears, museum conservator, and archivist, told local media.

Immediately after the fire that took 77 firefighters over 10 hours to contain, the Museum, located in a historic building constructed in the 1920s, was boarded up and placed off limits to archivists until the structure could be determined safe to enter. During the intervening time, an employee at the Museum noticed a sheet of plywood had been pulled away but it wasn’t until Oct. 8 that the staff were able to enter the gutted building and discover that the guns were missing.

“You get very upset and you’re mad and you want to get the little slimeballs that took them,” said Sears.

Still unaccounted for is a Japanese Type 94 Nambu pistol, a Japanese Arisaka Type 99 rifle, a Springfield 1903, a Winchester lever-action rifle from the 19th Century, and two bayonets.

The museum’s building was used as a National Guard Armory until 1978 and opened to the public in 1981. Its primary claim to fame was a collection of items associated with Nirvana frontman Kury Cobain who was an Aberdeen native.

Those with information about the stolen firearms are encouraged to contact the Aberdeen Police. 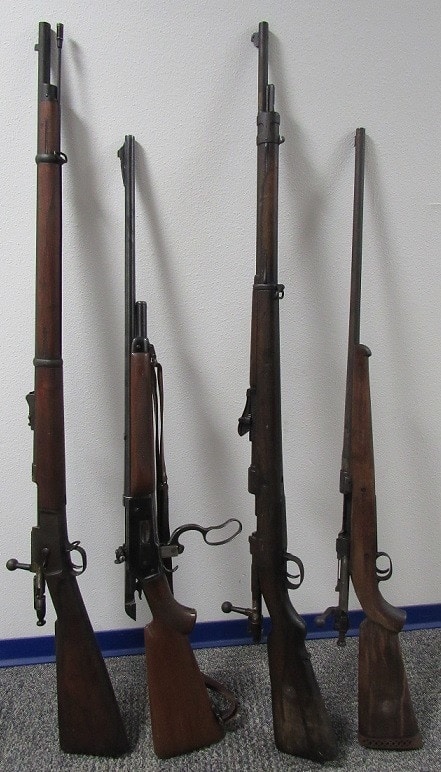 Police recovered a number of firearms as a result of a burglary investigation including three that belonged to the museum. (Photo: APD)