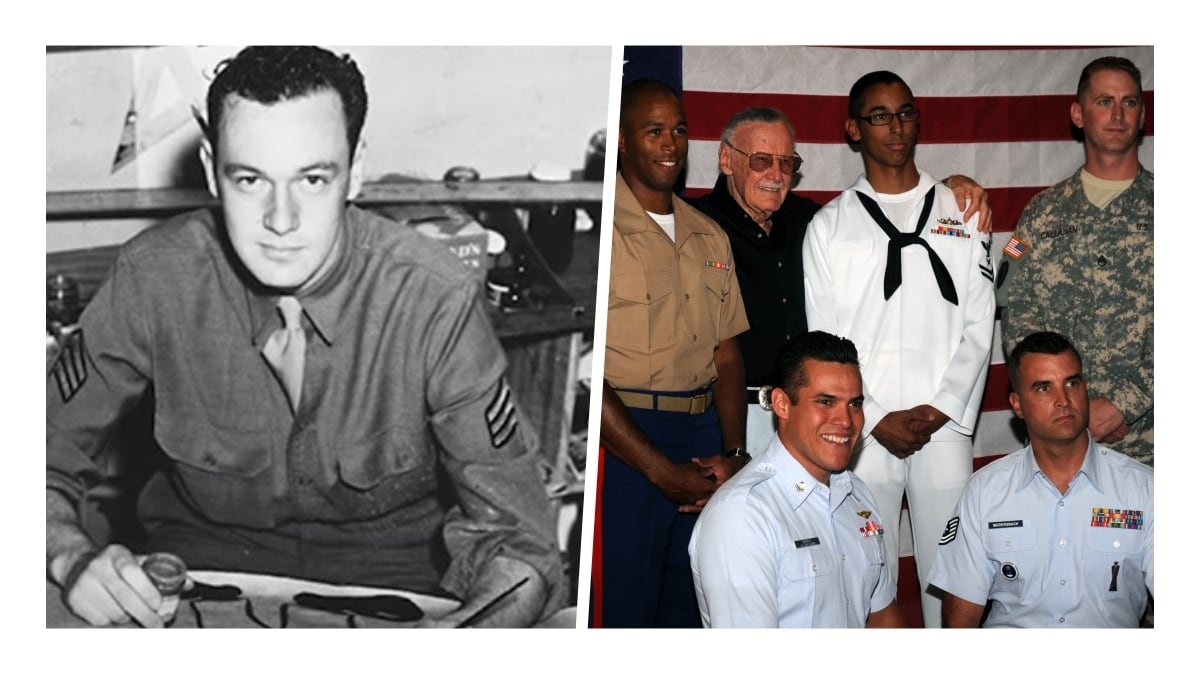 Stan Lee, born Stanley Martin Lieber, spent most of his life in the comics industry– with a break for WWII service in the Army– and with fellow artists, co-created legions of iconic characters, many of whom carried guns. (Photos: Lee during his military service, via U.S. Army/Lee at a 2011 Comic-Con event with servicemembers, via, U.S Coast Guard)

Longtime Marvel Comics head and chronicler of superpowers both real and portrayed, Stan Lee, died in Los Angeles on Monday.

Lee, born Stanley Martin Lieber in 1922, grew up in the Bronx and by age 17 was working at Timely Comics, a company that would later grow into Marvel. Some seven months before the Japanese attack at Pearl Harbor brought the country into World War II, Lieber, using the pseudonym Stan Lee, wrote his first comic, Captain America #3. Setting down his pencils, Lee soon put on a uniform and joined the Army Signal Corps shortly after hearing of “The Day Which Shall Live in Infamy,” working as a lineman before his skills were put to better use in making training films.

While Lee, along with now-celebrated artists such as Jack Kirby, Steve Ditko, and John Rimota, would help invent and shepherd hundreds of characters post-war, he is best known for his hand in crafting Daredevil, Doctor Strange, Spider-Man, the Fantastic Four, the Hulk, Doctor Strange, and the X-Men.

An unsung superhero skill, often highlighted in Marvel comics over the past half-century, are firearms in the hands of those fighting, more or less, for good. Among Lee-created characters who were good with a gun were “Dum Dum” Dugan, Sgt. Nick Fury, various S.H.I.E.L.D. Agents, and others. Later, as Marvel’s publisher, he green-lighted firearm-centric characters such as The Punisher, Rocket Racoon and War Machine– whose symbols, themes and tie-ins can often be found today at every shooting range and gun show in the country.

Even characters that Lee created without firearms later often used them. Spider-Man packed heat in the 2009 Noir series by David Hine, released while Lee was still at least a Marvel figurehead, as did Red She-Hulk. A running gag in the popular Marvel films of late is the inclusion of a cameo by Lee. During one, he portrays a Glock-armed security guard at the Smithsonian, earning his own entry into the IMFDB.

Moving past Marvel, the comic book master helmed and appeared in Stan Lee’s Superhumans, a documentary series that aired for three seasons on the History Channel. Based on a format of searching for those with almost super-human abilities, the second episode featured the famous Bob Munden, billed as perhaps the fastest and most accurate exhibition shooter of his day. The 27th episode, “Rapid Fire” showed off Jerry Miculek‘s shooting ability.

Lee’s passing was widely noted and he was publicly mourned across social media Monday, including by the Army and NASA.