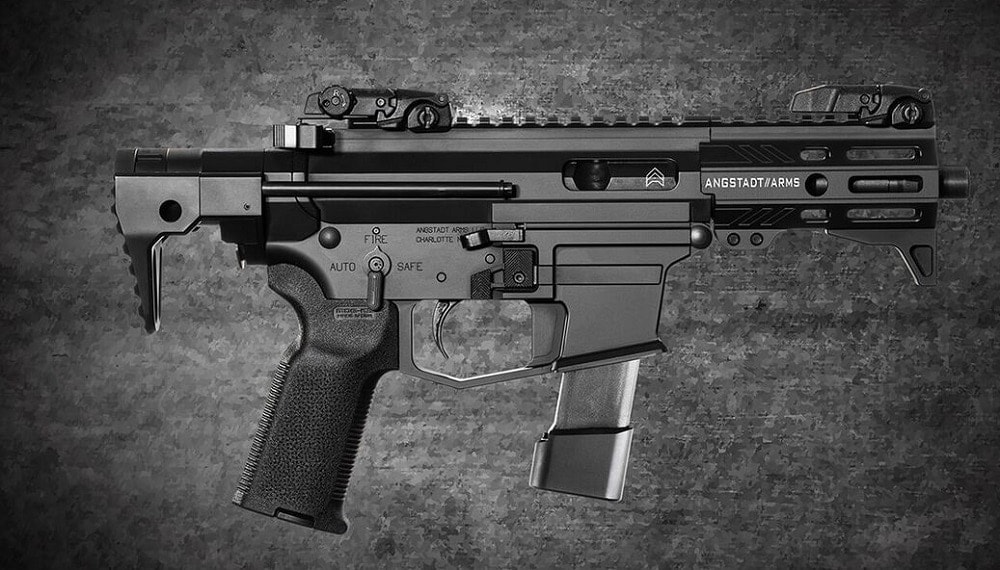 The SCW-9 has a lot going for it in a small package, to include Glock mags and a 1,100 rpm rate of fire. (Photos: Angstadt)

North Carolina-based Angstadt Arms this week released the details of the gun the delivered to compete in the U.S. Army Sub Compact Weapon Program.

Dubbed the SCW-9, the platform was submitted as Angstadt’s entry — along with those from five other companies — for evaluation for use by Army personal security details. Guns proposed for the program had to be a “highly concealable” SCW “capable of engaging threat personnel with a high volume of lethal and accurate fires at close range with minimal collateral damage.”

Aiming to meet those guidelines, the SCW-9 is some 14.7-inches long overall when its telescoping buttstock is collapsed. Featuring a 4-inch barrel with a three-lug adapter for suppressors, the 9mm sub gun takes double stack Glock pattern mags and weighs in at 4-pounds flat.

Select-fire, it has fully ambidextrous controls and can fire at 1,100 rounds per minute on full auto. Importantly, the gun uses a shortened multi-caliber AR-15 stock system.

Besides the current 9mm platform, Angstadt says they have tested the shortened stock system in both 5.56mm and .300 AAC and are working on a pistol brace version for the U.S. commercial market.

The Army currently uses HK MP5s for personal security detachments for high-ranking officers but is looking to upgrade. In line with that, the new SCW program originally involved more than a dozen companies to include Beretta, Brügger & Thomet, Colt, CMMG, CZ, HK, Noveske, PTR, Sig Sauer and Zenith Firearms.