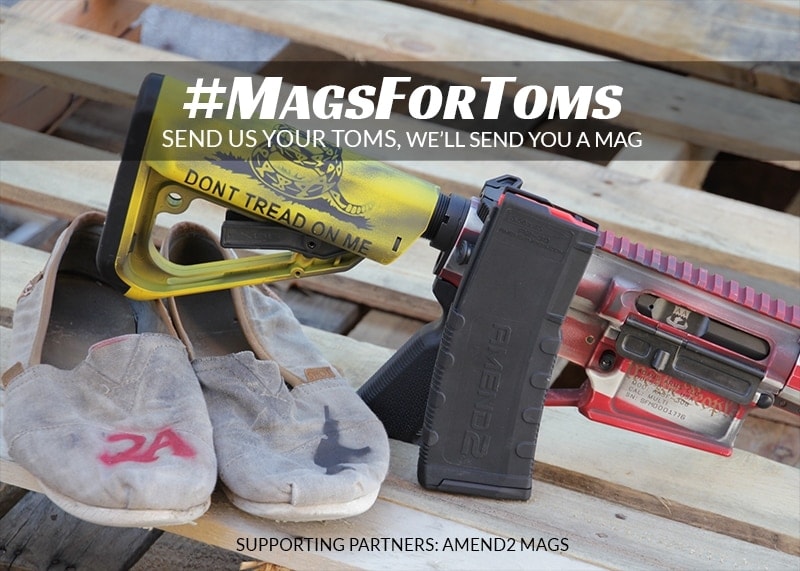 Toms Shoes founder Blake Mycoskie last Monday announced on “The Tonight Show Starring Jimmy Fallon” that his company would chip in $5 million to various anti-gun groups in hopes of bringing more restrictions and regulation on firearm sales. The shoe maker participates in a number of charitable operations ranging from giving shoes to people in impoverished areas to clean water to, now, gun control.

In response, Jens Krogh, the VP of sales and marketing for Adams Arms, fired back this week with a public offer that, for every pair of Toms sent to the gun maker, one free AR magazine will be sent to the donor in return. “Originally we were going to burn the shoes, but decided that’s no way to treat something that could be used again by homeless veterans,” said Krogh in a statement. “So we’re going to alter them with a pro-Second Amendment message and then donate them to several worthy causes for veterans and impoverished people living in oppressive countries where they do not have the freedoms we cherish.”

Partnering with Idaho’s magazine maker Amend2, those sending in shoes will get either a 30-round magazine or a 10-rounder if they live in an area with restrictions. Those sending shoes to Adams’ Odessa, Florida location need to include a note with their return shipping and email addresses while the company asks that participating gun enthusiasts “post a picture with #shoeburn #magsfortoms and #shallnotbeinfringed to spread the word.”

Adams posted on social media Wednesday that they have already received their first pair, and the “mag is on the way!”

First pair of Toms are in, with a mag on the way! Thank you for all your incredible support as we send our message that our rights shall not be infringed! And a massive shout-out to @amend2mags for partnering with us to make this possible. We're all in this together. #shoeburn #magsfortoms #shallnotbeinfringed #pistonlife #ar15 #pdw #precisionrifle #pewpew #pewpewlife