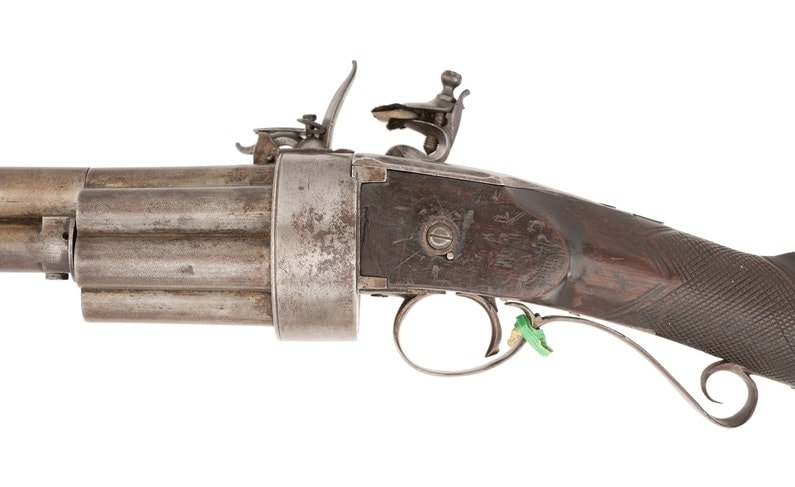 Described by as perhaps one of the most desirable early American military firearms in circulation, a 200-year-old revolving rifle sold this week at auction for a six-figure sum.

Capt. Artemus Wheeler of Boston was granted a patent on June 10, 1818, for a “gun, to discharge seven or more times,” of which he sold four examples to the U.S. Navy in Jan. 1821 for the then-high price of $100 each. In the end, the Navy wasn’t interested in the gun, which the Smithsonian notes as “the first revolving cylinder firearm patented in the United States and the first to be tried by the Services,” but the design went on to be used by others and these early repeaters are rarely encountered. So rare in fact that three of those four early Wheeler guns are in the Smithsonian’s own collection or that of the Virginia Military Institute.

The fourth gun, described as the “rarest and most desirable revolving American flintlock rifle as well as the rarest American martial flintlock arm” by Cincinnati-based Cowan’s Auctions, sold for $117,500 on Wednesday.

The .50-caliber seven-shot revolving rifle has a 32.625-inch barrel that uses microgroove rifling. The hand-rotated cylinder and automatic priming magazine which scraped a small amount of powder into the frizzen as the cylinder was turned, was far ahead of its time and Boston engineer Elisha Haydon Collier later updated the concept.

Cowan’s gun had long been off the market, part of the collection of firearms historian Mark Aziz, who recently died. More than 300 items from the Aziz collection were sold in lots this week by the auction house, with the Wheeler gun taking in the highest bid amount. Other rare guns included a Colt Paterson revolving shotgun that sold for $34,075 and an H.S. North revolving shotgun that went for $27,025.