Pearl Harbor: The cook who took up a machine gun and put it to good use (PHOTOS) 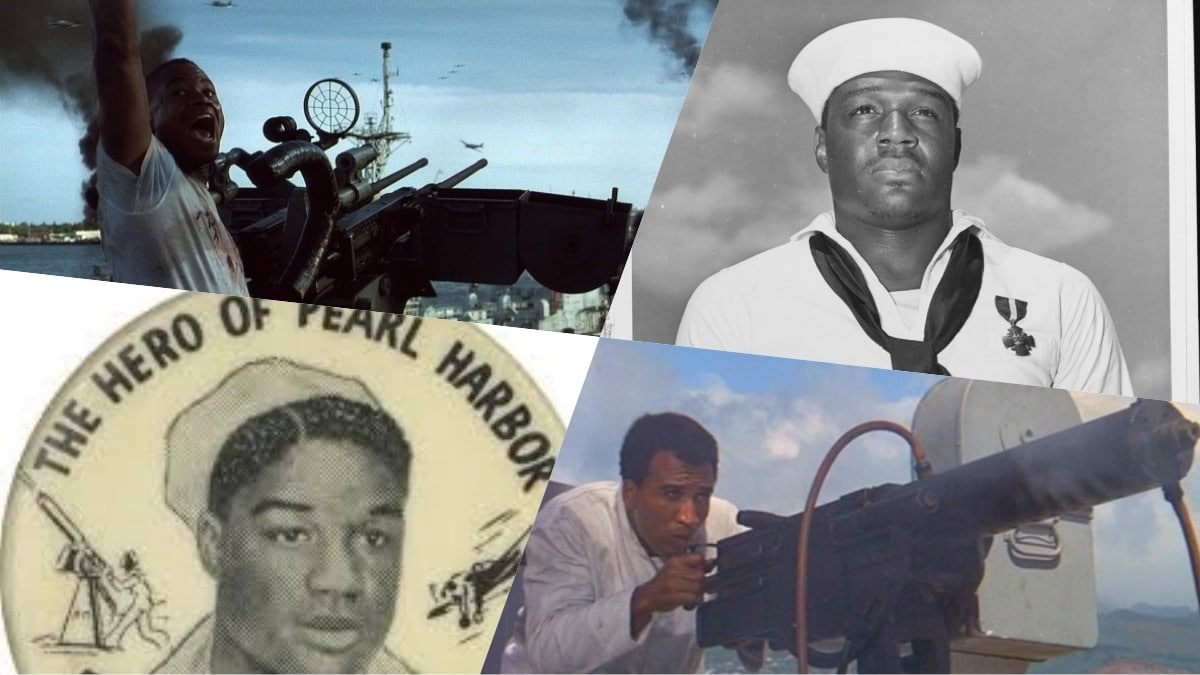 Dorie Miller received the Navy Cross for heroism during the Pearl Harbor Attack, December 7, 1941, and his actions– one man with a machine gun– echo in history.

Texan Doris “Dorie” Miller did not let the fact that he wasn’t trained on a machine gun stop him when he saw Japanese aircraft come in low over Pearl Harbor.

Born in Waco, Texas, Miller volunteered for the Navy in 1939, “to travel, and earn money for his family.” With career fields limited due to segregation, he was a mess specialist assigned to the mighty battleship USS West Virginia, part of the Pacific Fleet.

On the morning of Sunday, Dec. 7, 1941, West Virginia was moored at a berth along Pearl Harbor’s Battleship Row. Shortly after 8 a.m., although the two countries were at peace, waves of Japanese carrier-borne aircraft swooped in over Oahu and within minutes of the first wave, Miller’s ship was hit by at least six torpedoes and two bombs, sparking fires that would last 30 hours, leave the ship on the bottom of the harbor, and at least 106 members of her crew dead.

Miller, a former high school athlete recognized as a powerful man, during the attack was assigned to carry wounded members of the crew to safety and was later ordered to the ship’s bridge to help the West Virginia’s injured skipper, who died.

The cook, who had not been trained to use the gun, then manned one of the ship’s nine water-cooled .50 caliber Browning anti-aircraft machine guns until it ran dry and he was ordered to abandon ship.

As noted by the Navy:

Miller described firing the machine gun during the battle, a weapon which he had not been trained to operate: “It wasn’t hard. I just pulled the trigger and she worked fine. I had watched the others with these guns. I guess I fired her for about fifteen minutes. I think I got one of those Jap planes. They were diving pretty close to us.” 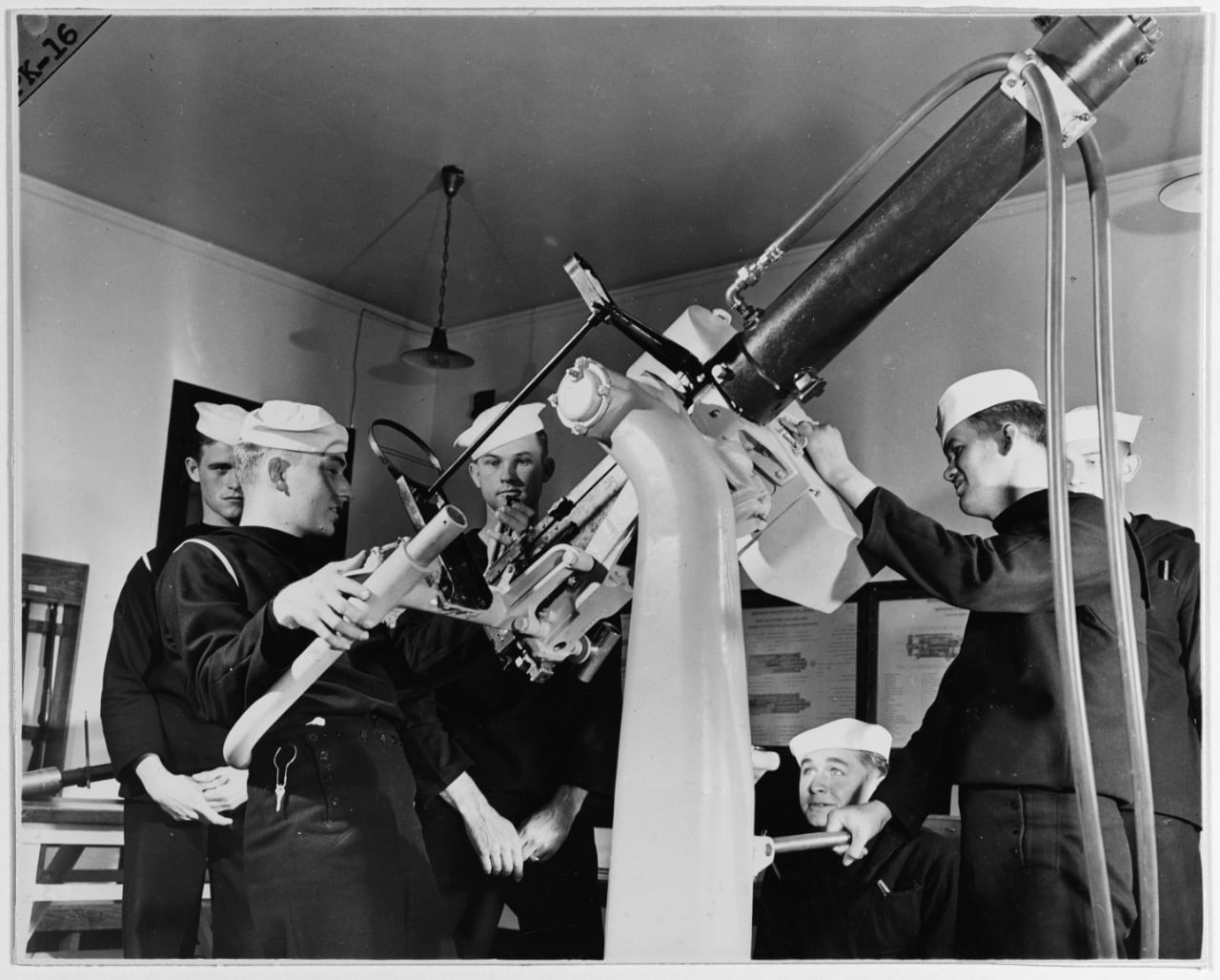 The water-cooled M2 Browning weighed 121-pounds and fired at a 550-round-per-minute cyclic rate. Twin hoses carried coolant water to the gun barrel to keep in cool in sustained firing. It was fed via 200-round belts in “tombstone” boxes.

Five months later, Miller was personally presented with the Navy Cross by Adm. Nimitz aboard the carrier Enterprise, the first African-American to receive the Navy’s second-highest decoration awarded for valor in combat. 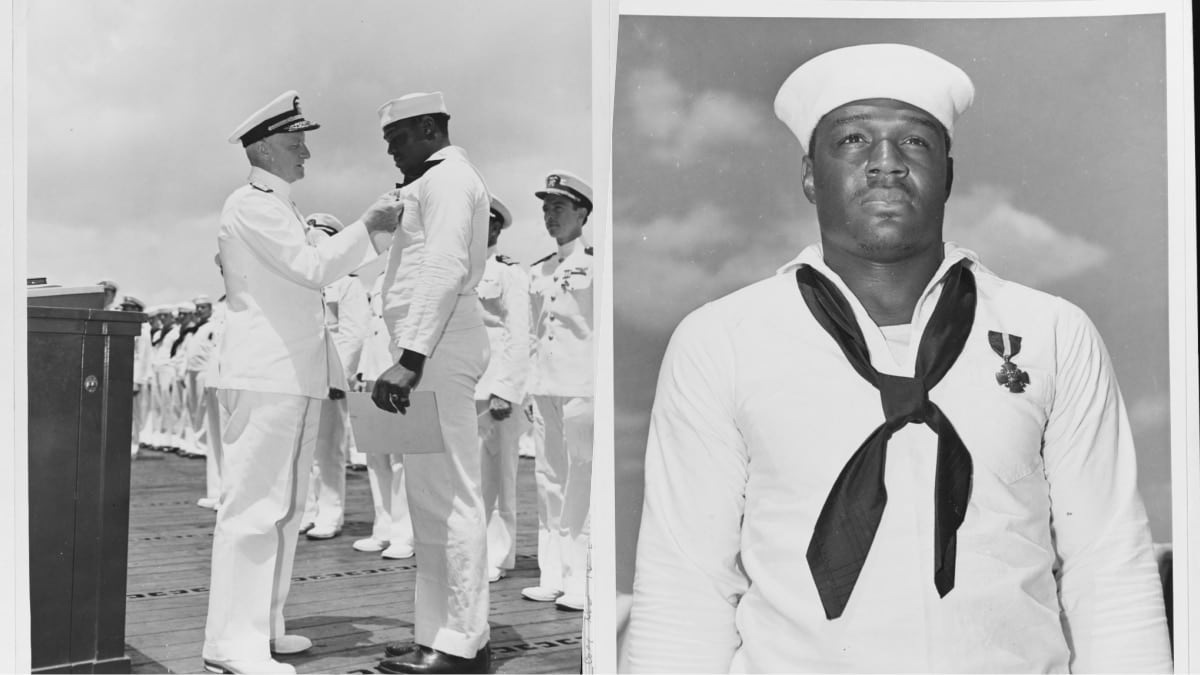 Remaining with the Fleet, Miller would serve on the ill-fated cruiser USS Indianapolis and later the aircraft carrier USS Liscome Bay (CVE-56). Sadly, he never returned to his family after the war, marked missing and presumed dead after Liscome Bay was torpedoed and sunk by a Japanese submarine in November 1943. The Navy later named a frigate after him.

Most recently, Cuba Gooding, Jr. recreated the scene in 2001’s Pearl Harbor, although he somewhat incorrectly utilized twin air-cooled M2s rather than the single water-cooled mount that Miller actually used.

Last year, a statue of Miller was installed in Waco, his hometown, part of a larger memorial planned in the city.