Sheila Earley visits with us today and shares how she likes to approach concealed carry for women. She is a LTC instructor, a NRA instructor, a CCL holder and a Texas Commission of Law Enforcement classroom instructor. Earley and her husband, Judd, have been teaching classes in Texas since 2000.

Earley prefers to have her gun on her rather than in her purse. “If I get pulled away for any reason, I always have my gun with me,” she said. So, she uses what is called a “flashbang” — also called a bra holster. The flashbang snaps into place over small pistols and revolvers. It tucks underneath a bra band, where it is secured in place by both the band itself and a soft suede strap that snaps around the center portion of the bra between the bra cups. The open-bottom design of the holster allows the gun to be drawn simply by pulling straight down on the grip of the gun, while the suede strap keeps the holster securely attached to the bra. 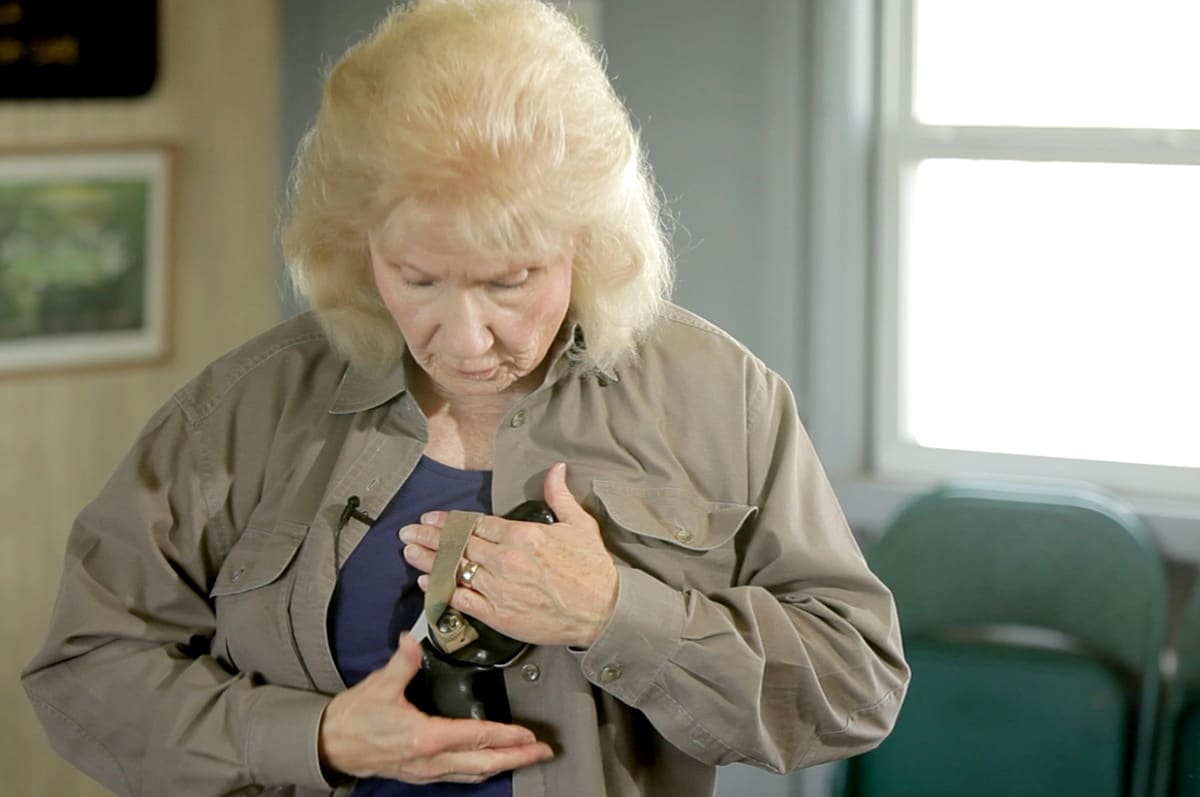 Mrs. Early demonstrating how the flash bang holster and gun are positioned once attached to the bra. (Photo: Don Summers/Guns.com) 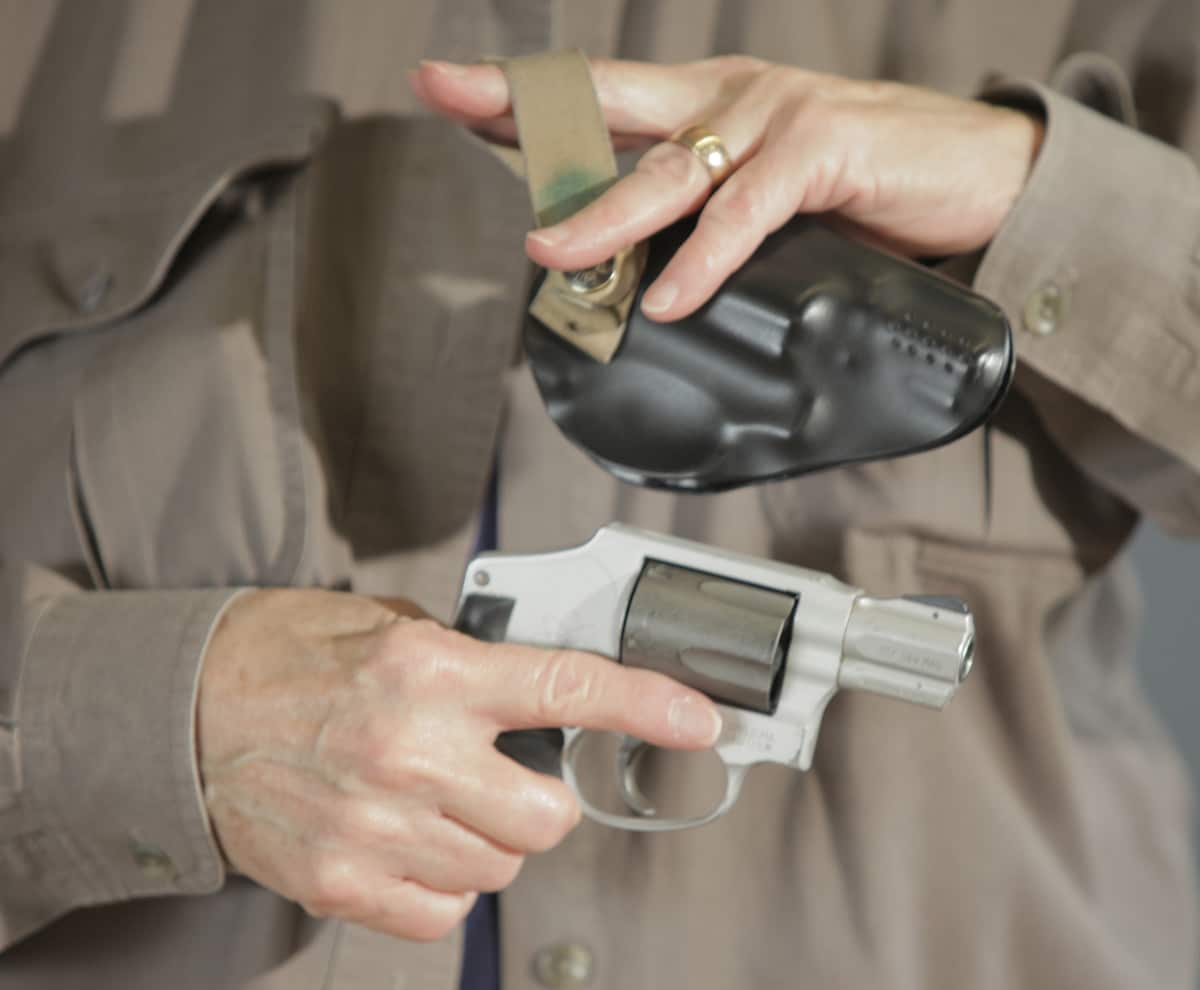 “I always wear a loose tank top under a shirt to help conceal my gun,” Earley said. She then shows us the reason why it’s called a flashbang by demonstrating how a gun can be drawn quickly in a “flash” and “bingo/bang” … the weapon is instantly out and ready to go.

Earley prefers to carry her Smith & Wesson J Frame, 5-shot, hammer-less revolver in her flashbang but also has bra holsters for her Glocks, a G43, and a G42. Each bra holster has a custom fitted, gun specific shield that is molded to the firearms that she likes to carry.

Earley’s second favorite way to conceal carry is with the Coronado Leather Concealed Carry Bag. “I like the Coronado specifically because it has a wide, sturdy shoulder strap,” she said. 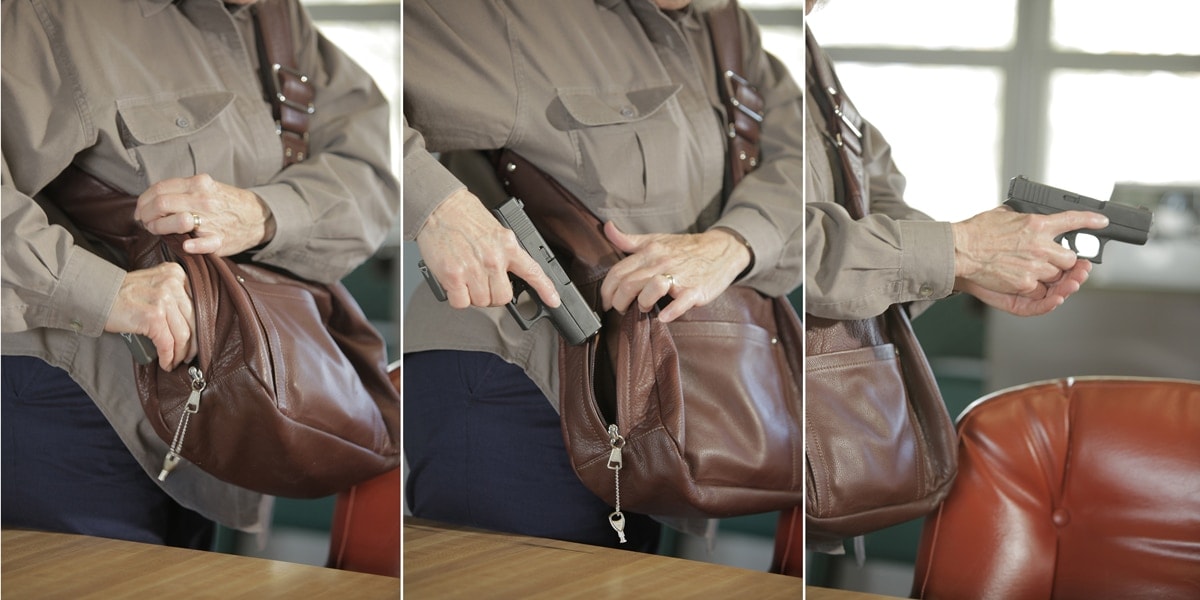 In this series of photos Mrs. Early demonstrates drawing the gun from her purse. (Photo: Don Summers/Guns.com)

As demonstrated, her gun, with a magazine, slips into a pocket on the side of the purse. She points out that a woman can carry this bag as well as wear a flashbang at the same time. “With this bag, when someone approaches you, you don’t have to show them that you are armed,” she said. “With your bag over your shoulder, you can put your hand on your gun through the side pocket, slightly point the purse in their direction and tell them to stop without exposing your firearm. Your weapon is always available, able to shoot right through the purse and may save your life or the lives of your family.”

The Flash-Bang and Coronado Bag are two of Earley’s favorite ways to carry. “There are many other options for concealed carry, cross-body bags,” she said. “Check them out and choose whatever is most comfortable.”