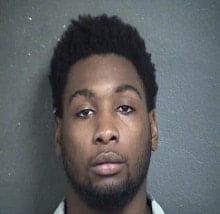 A Missouri man will spend five years in prison after admitting he sold guns and marijuana to undercover federal agents in Kansas City last year.

Antonio Rodriguez Robertson, 21, pleaded guilty in September to one count of possession of a firearm in furtherance of drug trafficking. In return, federal prosecutors dismissed 13 other drug and gun trafficking charges from an indictment filed in April.

It’s unclear how Robertson obtained the guns, however, law enforcement in Kansas City reported last year an alarming rise in gun thefts across the city. Local law enforcement recorded 804 gun thefts in 2016 — up from 588 in 2015. In 2017, more than 830 guns went missing.

“It comes down to personal responsibility,” Mark Jones of Chicago, a retired supervisory special agent in the U.S. Bureau of Alcohol, Tobacco and Firearms, told the Kansas City Star in 2017. “All guns start life as a legal commodity. But when gun owners fail to protect their weapons, criminals take them into the underground market.”

The DOJ estimates murder rates in 29 of the county’s largest cities will decrease more than 7 percent this year. Federal data suggests 2018 could be the DOJ’s busiest year ever in more than a decade for weapons prosecutions.