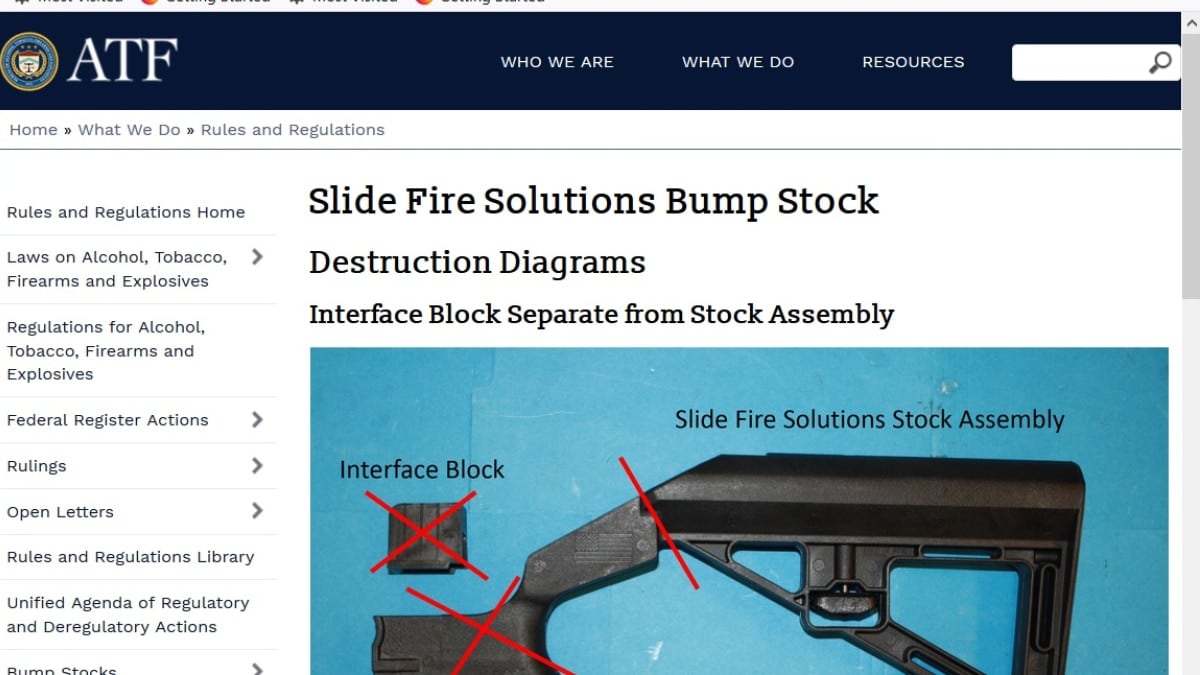 With owners of the estimated 520,000 devices currently in circulation facing federal “machinegun” charges that carry up to 10 years in prison and $250,000 in fines for each violation, the ATF just hours after Whitaker’s announcement posted extensive bump stock destruction diagrams online. (Photo: Screenshot, ATF website)

Legal challenges have already been filed to a planned federal requirement to give bump stock owners 90 days to destroy or surrender their devices.

The Firearms Policy Coalition, Firearms Policy Foundation, and Madison Society Foundation on Tuesday filed a lawsuit in a Washington, D.C. federal court against Acting U.S. Attorney General Matthew Whitaker and the Bureau of Alcohol, Tobacco, Firearms, and Explosives seeking a motion to block a pending ban on bump stocks announced earlier that day. The member groups, filing on behalf of Pennsylvania bump stock owner Damien Guedes, argue Whitaker and the ATF are overstepping their legal authority.

“The ATF has misled the public about bump-stock devices,” said Pennsylvania firearms attorney Joshua Prince, who along with Adam Kraut, is representing Guedes. “Worse, they are actively attempting to make felons out of people who relied on their legal opinions to lawfully acquire and possess devices the government unilaterally, unconstitutionally, and improperly decided to reclassify as ‘machineguns’.”

The administration of President Trump has promised in recent weeks to outlaw the niche devices which became a public focus after their use in the 2017 Las Vegas Route 91 Harvest Festival Shooting.

Going back to last December, regulators have been researching federal law to determine if certain bump stock devices fall within the definition of “machine gun,” which led to Trump in February ordering the Department of Justice to craft regulations to “write out” the devices himself. Since then, the primary maker of bump stocks in the country stopped taking orders for the controversial devices, although they are still readily available.

“President Donald Trump is a law and order president, who has signed into law millions of dollars in funding for law enforcement officers in our schools, and under his strong leadership, the Department of Justice has prosecuted more gun criminals than ever before as we target violent criminals,” said Whitaker on Wednesday. “We are faithfully following President Trump’s leadership by making clear that bump stocks, which turn semiautomatics into machine guns, are illegal, and we will continue to take illegal guns off of our streets.”

With owners of the estimated 520,000 devices currently in circulation facing federal “machinegun” charges that carry up to 10 years in prison and $250,000 in fines for each violation, the ATF just hours after Whitaker’s announcement posted extensive bump stock destruction diagrams online as the current rule offers no chance to grandfather existing stocks and no compensation for those turned in or destroyed.

Besides the Guedes lawsuit, Erich Pratt, president of Gun Owners of America, announced his group has “already prepared a lawsuit against the ATF and the Department of Justice to seek an injunction protecting gun owners from these unconstitutional regulations.” Meanwhile, the National Rifle Association has expressed disappointment in the rule change, arguing it “fails to address the thousands of law-abiding Americans” who currently own the devices.

Although gun control groups of all stripes, to include the Brady Campaign, Everytown, and Giffords on Wednesday took large credit in pushing for the ban, they also cautioned the effort may be bogged down in the courts as a result of the DOJ’s action this week, in turn urging Congress to act on the issue.