Faces lost among the gun community in 2018 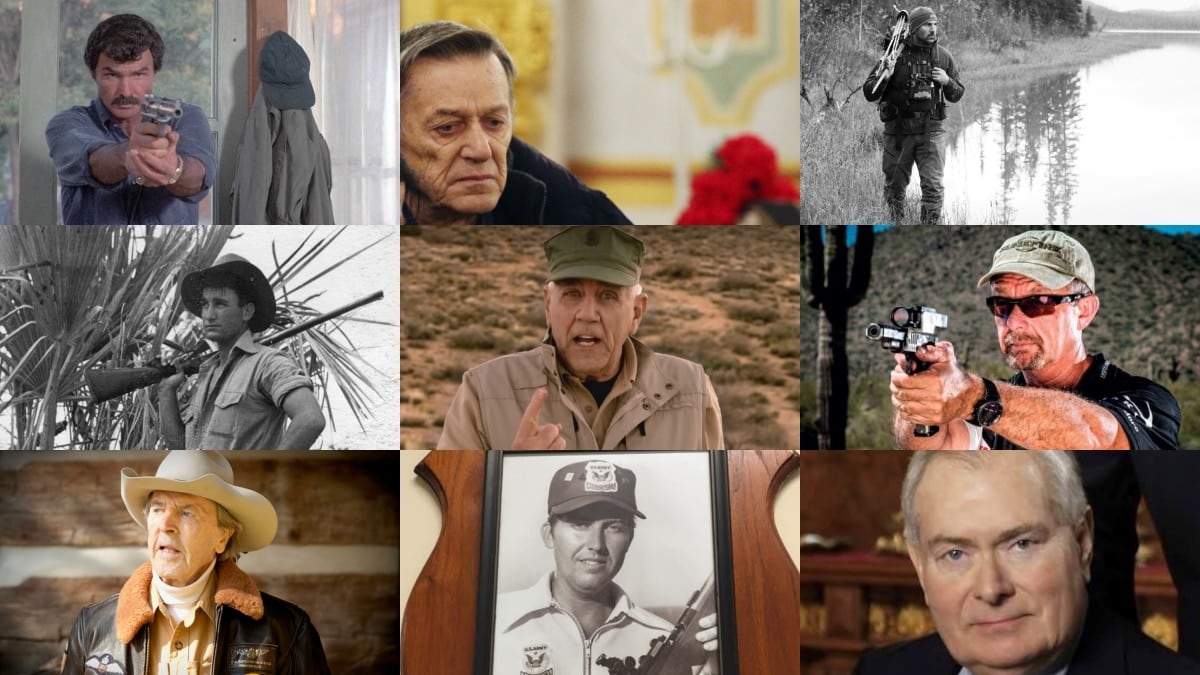 Burt S. Avedon — Volunteering with the famed Flying Tigers and later serving in both WWII and Korea as a Navy fighter pilot– earning the Navy Cross, Silver Star, and two Distinguished Flying Crosses– Avedon went on to become a professional hunter and head expedition gear company Willis & Geiger Outfitters for years before founding today’s Avedon & Colby outfitters, which specializes in field clothes. Avedon died in March at age 94 and was buried at Arlington National Cemetery.

Richard J. “Dick” Casull — Creator of the hard-hitting .454 Casull cartridge that bears his name, Dick Casull loved wheelguns of all kinds, going on to design one of the first viable mini-revolvers and lead Wyoming-based Freedom Arms, who produced the latter in the 1970s and 80s. Casull died in May and is buried in Freedom, Wyoming.

Charles Davis — Kentucky-native Davis served in the Navy in WWII then made a career in the Army, spending more than 20 years with the Army Marksmanship Unit. During that time he picked up over 200 awards including his 1968 feat of becoming the only shooter to win both the Wimbledon and Leech Cups in the same year. He competed in the 50-metre running target event at the 1972 Munich Olympics. Davis died in January, aged 90.

“The Gunny” R. Lee Ermey — Long associated with Glocks, guns, and everything Marines. Besides Vietnam-era service in the Corps and 120 acting credits under his belt, the firearms enthusiast hosted the History Channel’s Mail Call and Lock n’ Load shows from 2007 to 2009, delving into military arms, customs and equipment, often riddling watermelons with various firearms for effect. Since 2015, he hosted GunnyTime on the Outdoor Channel. Additionally, he was featured in a long-running series of public appearances and spots for Glock and was elected to the board of directors for the National Rifle Association. He died after complications from pneumonia in April, aged 74.

James “Cowboy” Fernandez — A duck calling legend, Fernandez worked with George Yentzen to design and patent the first double reed duck call in 1950 and the triple reed in 1968. The winner of numerous calling competitions both in the U.S. and abroad, he was inducted into the Legends of the Outdoors Hall of Fame in 2014. He passed away Aug. 16, in Beaumont, Texas at age 86.

Robert “Bob” E. Graf — One of the original founders in 1957 of iconic ammunition supplier, Graf & Sons, he helped grow the small-town Missouri company into the “Reloading Authority.” An avid wingshooter, Graf, 84, died in April.

Jason Hairston — The CEO of KUIU, Hairston started the company in 2010 as a result of a life-long passion for hunting after playing professional football with the San Francisco 49ers and Denver Broncos. Known for its unique style of camouflage patterns and ultralight gear, the company has seen widespread adoption and collaboration within the outdoor industry. He died in September at age 47.

Robert Himber — A noted survival writer and trainer who published and taught under the pseudonym N.E. MacDougald, Himber died while climbing in Telluride, aged 74.

Victor Kalashnikov — Son of the legendary Mikhail Kalashnikov, Victor followed in his father’s footsteps and became a firearms designer. Creator of the PP-19 Bizon, which evolved into the better-known Vityaz submachine gun, Victor died in Izhevsk in March, aged 75.

Boris Kokorev — A five-time Olympian, Georgian-born Kokorev represented both the Soviet Union and later Russia at every Olympic meeting between 1988 and 2004. He won the gold in the 50m pistol event at the 1996 Atlanta games. He died in October, aged 59.

Stan Lee — Longtime Marvel Comics head and chronicler of superpowers both real and portrayed, Lee often turned to skill with a firearm as a superhero trait. Among Lee-created characters who were good with a gun were “Dum Dum” Dugan, Sgt. Nick Fury, various S.H.I.E.L.D. Agents, and others. Later, as Marvel’s publisher, he green-lighted firearm-centric characters such as The Punisher, Rocket Racoon and War Machine– whose symbols, themes and tie-ins can often be found today at every shooting range and gun show in the country. Lee, a WWII Army veteran, died in November at 95.

Johannes “John” Pierik — A Dutch skeet champion, Pierik competed in both the 1980 and 1984 Olympic games representing the Netherlands. He died in January, age 68.

Valerii Postoyanov — A Soviet sports shooting champion, Postoyanov represented his country in numerous international competitions throughout the Cold War, including vying against American Charles Davis at Munich in 1972. He died in February at age 76.

Daniel Puckel — Hailing from The Land of Lincoln, Illinois-born Puckel joined the Army Advanced Marksmanship Unit right out of after competing on the University of Tennessee’s rifle team and soon picked up a full dozen medals at the 1959 Pan American Games where he broke three world records in free rifle. He later went on to compete at the 1960 Summer Olympics. Puckel died last month, at age 85.

Burt Reynolds — The film star, action hero and all-around guy’s guy died in September at age 82 leaving a legacy of some of the best on-screen gun references of all time. An avid hunter in his younger years, Reynolds even appeared on some of the first nationally-televised hunting trips for The American Sportsmen on ABC in the 1960s.

Bruno Rossetti — A fixture in Italian skeet shooting, Rossetti picked up the bronze medal at the 1992 Barcelona Olympics. His son, Gabriele, went on to bring the gold in skeet back to Italy from the 2016 Rio games. The elder Rossetti died in February, aged 57.

William Batterman Ruger, Jr. — The son of the famous inventor who helped found the company, Bill Ruger, Jr. went on to become its second CEO and retired after an extensive 42-year career with the gun maker in 2006. He died in September at age 79.

John Henry “Harry” Selby — A famed South African safari hunter known for his love of the .416 Rigby and familiarity with the veldt, Selby was featured in a number of works by big game writer Robert Ruark (Horn of the Hunter, et. al) which preserved him for posterity. He died in January, at the ripe old age of 92.

Viktor Shamburkin — A Soviet shooting sports athlete, Shamburkin won the gold at the 1960 Olympics in Rome in 50m rifle. He died in Moscow in May, aged 86.

R. Blake Stevens  — The founder and head of Collector Grade Publications, which published dozens of in-depth books on collectible firearms, died in April, age 80. He personally authored more than 30 books on classic arms such as the Browning Hi-Power, German FG-42, and FAL.

Ernie Vande Zande — Team Leader for the United States Olympic Shooting Team in 1996, Vande Zande started shooting after a challenge from schoolmate at age 11 and went on to set more than 200 records, achieving a reputation as “the human benchrest.” Major Vande Zande died on Sept. 29 at age 70.

Michael Voigt — A firearms trainer who won his first IPSC Handgun World Shoot medal in 1993, Voight worked in research and development for SureFire and Safariland before becoming president of the United States Practical Shooting Association in 2000. Voigt was USPSA Multigun National Champion over a dozen times. He passed in April after a bout with cancer.