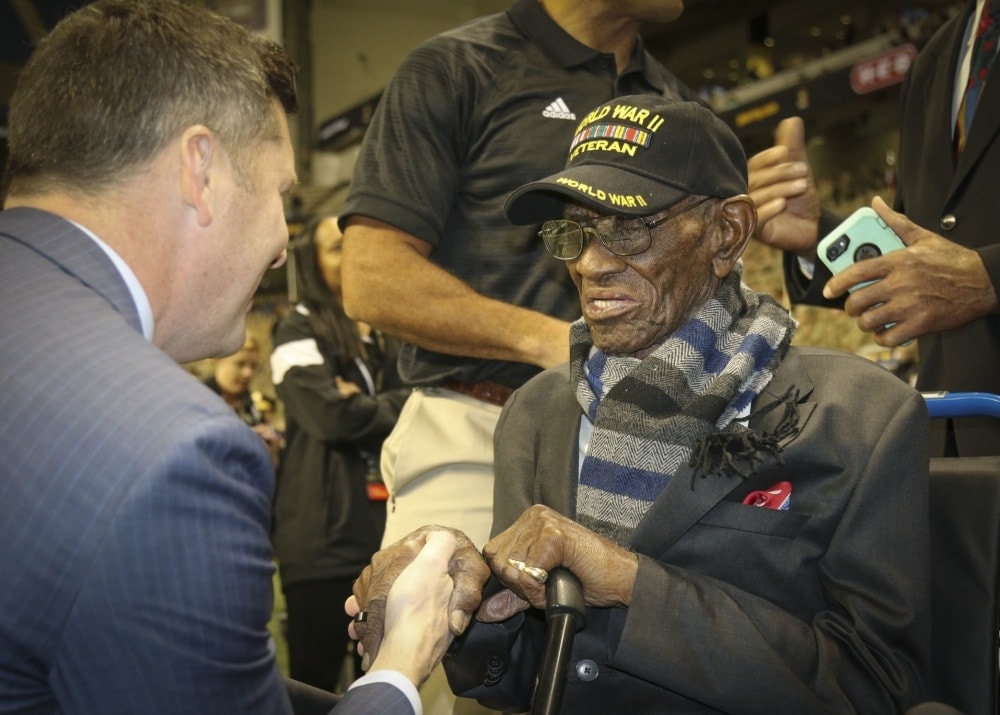 The Under Secretary of the Army shakes hands with then-110-year-old Richard Overton, who presented the game ball for the 2017 U.S. Army All-American Bowl held in the Alamodome in San Antonio last January. He was the oldest surviving U.S. WWII veteran. (Photo: U.S. Army)

The oldest living man in the United States, as well as the oldest surviving World War II Veteran, passed away in Texas on Thursday.

Richard Arvin Overton was born in Bastrop County, Texas in 1906. President Theodore Roosevelt was in the White House and the newest shotgun of the day was the Browning Auto-5, which had only just entered the market.

Overton joined the Army in Sept. 1940, enlisting at Fort Sam Houston, and served throughout the Pacific Theatre in WWII including supporting operations on Okinawa and Iwo Jima, landing “on more beaches under fire than he could remember.” Rising to T/5, he was a member of a segregated aviation engineer unit that performed the vital task of creating and improving airfields in remote outposts. After the war, Overton returned to Texas and worked for the state until he retired.

The Austin Statesman reported he died Thursday at a night rehabilitation facility in Austin, where he had been since Christmas Eve after a bout with pneumonia. The U.S. Army mourned his passing, saying, “He was a hero to us all and his legacy will continue throughout the Army’s ranks.”

A fan of cigars, guns, and whiskey, Guns.com’s own Ben Philippi caught up to Mr. Overton at his Texas home in 2015 to talk a bit about all of the above.