A Soviet Russian-designed weapon with its roots in WWII, the Chinese helped tiny Albania roll their own SKS rifles in the 1960s and 70s after they both stopped talking to Moscow. Eric and Chad with IV8888 touch on this oddball 7.62x39mm carbine in the above video.

Designed by Russian weapons engineer Sergei Simonov, the SKS-45 was beta-tested by the Soviets in the last days of the push against Berlin. With the kinks worked out by 1949, the 10-round semi-auto was adopted by the Russkis– briefly– until the much better (and select-fire) AK47 was put into production. However, in the interest of helping the international Communist community, the Kremlin spread the knowledge of how to build the more dated SKS design to their newfound allies in Red China, Romania, Poland, Yugoslavia, and East Germany.

With the tiny country of Albania, under the regime of Marxist dictator Enver Hoxha, on the outs with the Soviets by the 1960s, he turned to one of the few friends he had left and, from behind the Bamboo Curtain, China helped get the ball rolling on the Albanian SKS. After all, what is a man with as many as 750,000 bunkers for a population of 3 million to do when he needs lots of guns? China, which had split with the Soviets already due to disagreements over just what made a good Marxist, was eager to help. 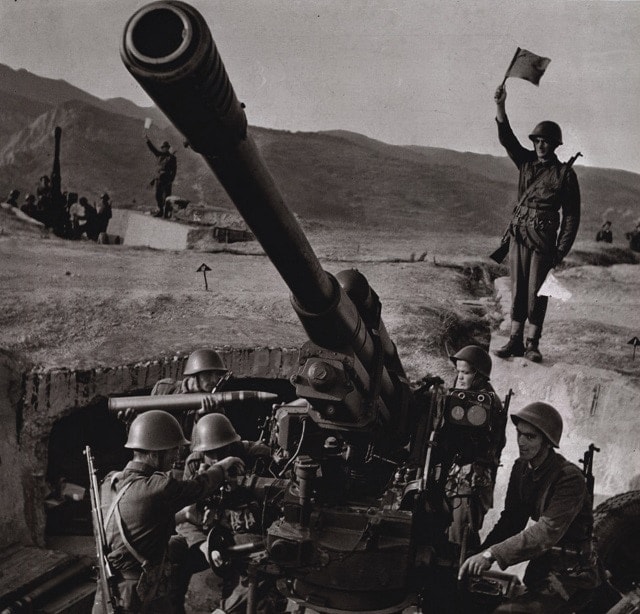 The Albanian People’s Army of the Cold War-era could field up to 350,000 soldiers, although they were equipped with largely obsolete gear. The above photo from the 1970s shows a group armed with a WWII-era M1939 KS-12 air defense gun and slung SKSs. Note the Chinese-style bandoliers for SKS stripper clips.

Based largely on the Chinese Type 56, the Albanian SKS shares many of its design components but has several notable differences that are all-Balkan. These include a longer handguard, with three distinct slots, that covers the gas tube; a curved magazine, double trapdoors in the butt plate for cleaning kits, and a blued spike bayonet. Reportedly, only about 20,000 of these guns were produced and few were imported to the U.S. in the 2000s.

With more on the design, check out the below from Ian McCollum with Forgotten Weapons.