“From prairie dogs to pachyderms to Peterbilts — ” that’s one helluva promise to hunters on the capability of the Big Horn Armory AR500 in .500 Auto Max. The company famous for high-end, hard-hitting lever guns has ventured into the AR-market in a big way. Fifty caliber big.

The .500 Auto Max is essentially a rimless .500 S&W Mag round built to run in a semi-automatic AR-10 style platform. The Auto Max offers greater velocity and bullet weights over something like the .50 Beowulf, and is built on the much heavier AR-10 platform. Reloaders will be pleased to know they can utilize the same dies, shell holders, and load data as the .500 S&W, though a taper crimp must be used instead of the roll crimp, as the Auto Max headspaces on case mouth instead of the rim.

While the big ‘ol .500 Auto Max round steals much of the press with its potency, it is the Big Horn AR500 gas-operated semi-automatic rifle that drives the whole shebang. Per the company, three pulls of the trigger delivers .50 BMG power on target. The heavy 18 inch barrel wears 1-in-24-inch twist rifling. An adjustable gas block allows shooters to tailor the gun to their ammunition. The massive bolt carrier group modifies a standard AR-10 version to handle the round. An Adaptive Tactical adjustable buttstock is capped with a seriously thick pad to tame recoil.

Both the safety and the bolt release are oversized and ambidextrous, while the Nitrite coating on all metalwork is clean and durable. (Photo: Kristin Alberts/Guns.com)

Weighing in just under 10 pounds sans optic, the gun is no slouch, but needs its weight to control recoil. The full-length Picatinny rail offers ample optics mounting space, as the gun ships without sights. Everything is well thought-out, with an ambidextrous safety and bolt release. An M-LOK forend and with additional forward rail mounts round out the package. The big boy ships in a hard case with a single five-round magazine at an MSRP of $1,999. The guns have only recently began shipping in late 2018. For those who desire a .500 Auto Max in a smaller and lighter package, the company just announced a 10-inch barreled AR500 pistol with an MSRP of $2,199.

For those unfamiliar with Big Horn, it’s high time you get to know these folks. Based in Cody, Wyoming, Big Horn opened its doors in 2008 “with the expressed purpose of building a Browning-type lever gun chambered for .500 Smith and Wesson Magnum.” Best of all, Big Horn is an employee owned company “making All American guns, made in America.” While they did indeed release that initial gun — the Model 89 — work did not stop there.  No sirree. “Our commitment to quality, fit and finish rivals that seen in many custom only guns.” When they wanted a new challenge, Big Horn ventured from fine lever guns to these new semi-automatic AR500’s.

We packed up our factory ammunition, which is currently available from two sources: Buffalo Bore and Underwood.  It’s important to note that Buffalo Bore developed the Auto Max round in conjunction with Big Horn, so they have the immediate edge on knowing the nuances of the caliber. For reference, Big Horn staff warned us that early runs of Underwood .500 Auto Max were sometimes overly hot loads with primer problems. We did not experience any issues with any of our rounds, though the Buffalo Bore outshot Underwood on the whole. Though factory ammunition offerings are somewhat limited, brass is available from Starline for handloaders. 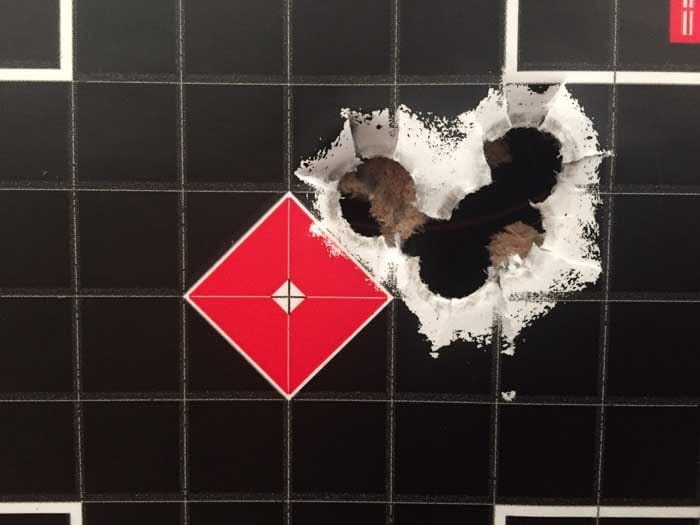 Accuracy can only be described as exceptional from a platform not always known for extreme precision. We sighted in the AR500 at 100 yards, and while it is touted as “the most powerful short-range cartridge in the world,” we would have no qualms reaching out to 200-plus with those big chunks of lead.  Our best three-shot, hundred yard group with Underwood’s ammunition came with the Xtreme Penetrator bullets and measured 1.35-inches. When we finally got our hands on some Buffalo Bore rounds, we were thrilled with those results. A five-shot, hundred yard group shot with Buffalo Bore’s 400-grain JFN measured just under an inch, center-to-center. 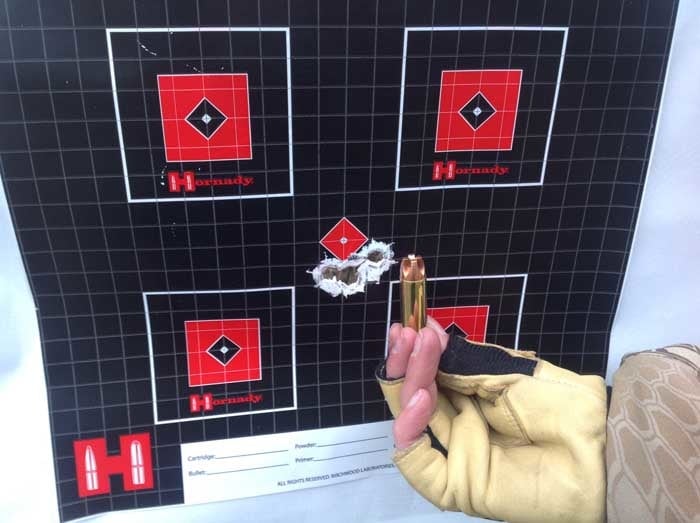 The AR500 in .500 Auto Max packs the wallop to put the knock-down on hogs, deer, bear, tyrannosaurus rexes, and more.  With a round that can handle bullet weights from 275-to-700 grains, there’s not much hunters can’t take down. Given the combination of a weighty barrel, thick recoil pad, and heavy-duty buffer tube, recoil was nowhere near what we expected, with felt recoil slightly more than that of a standard AR in .308. The muzzle blast and noise however, were in a class of their own, and turned a few heads on the range.

We have only a few nitpicks on the AR500, though both are simple fixes. The charging handle is somewhat small, making it difficult to grasp and pull with a scope mounted. Larger wings would be most welcome, but aftermarket options are plenty. Secondly, the magazine that shipped with our rifle was not up to par. We struggled when loading the mag to its full five round capacity, as the lips of the magazine allowed the top round to pop out and hinder feeding when loaded with more than four. That’s a very simple fix, either replacing the magazine or tweaking the steel lips. When fed correctly, the AR500 reliably cycled all the ammunition offered to it. Not only did it cycle, but shot accurately. The trigger breaks clean at, or just slightly less than, four pounds, and was better than expected on a gun not designed for long range accuracy.

The AR500 is a well-thought-out gas gun that improves upon the AR-10 platform. Attention to detail and overbuilding are Big Horn’s claims to fame. (Photo: Kristin Alberts/Guns.com)

The attention to detail essentially puts the Big Horn in a class all its own. For instance, the traditionally-dull lines of the AR-10 platform have been replaced with modern classy design flairs. Most controls are oversized and ambidextrous, and the scalloped trigger-finger resting groove is pure love. A concave grooved area at the front of the magazine well offers an ideal place to grasp the rifle without grabbing and canting the magazine. The rubberized Ergo pistol grip is at once comfortable in the hand, and offers plenty of hold in the wet and muddy conditions often facing hardcore hunters.

We have no doubt the AR500 and the Auto Max chambering would be most sought after by hunters who love AR platforms and seek something built well enough to handle the heavier pressures of a potent, do-all round. In that realm, it would really be difficult to beat. This is a rifle that looks and feels overbuilt.  The rifle is hefty, but balances surprisingly well. The build of the Big Horn AR500 is second to none.

Big Horn Armory has a track record of creating their own big bore categories, and what they’ve done with the AR500 Auto Max is no different. Not only did they dream up the Auto Max round in conjunction with Buffalo Bore, but also a big bore AR capable of reliably running the round. Whether you’re hunting prairie dogs or pachyderms, rest assured the Big Horn will do its part if you do yours.  Does anybody really need a .500 Auto Max? Probably not. But it’s hard not to want one of Big Horn Armory’s creations.