DOJ survey: Most armed criminals don't get their firearms from gun shows, stores

The survey of prison inmates in state and federal facilities found that, while a third had guns during their crime, most got them in places other than gun stores. (Photo: U.S. Bureau of Prisons)

A survey released this month by the U.S. Department of Justice found that the vast majority of gun-armed criminals serving time obtained their guns on the street or via other means.

The nationwide survey of 1.37 million inmates at the state and federal level, conducted in 2016, found that about a third said they possessed or carried a firearm while committing their crime. Of those 256,400 prisoners, some 43 percent said they obtained their guns from illicit “street” sources such as other criminals, often by bartering stolen goods or drugs. The next leading source, about 25 percent, came as gifts or purchases from friends or family members. About 6 percent were able to receive their guns through theft.

When it came to retail sources such as gun shows, flea markets, firearm stores, and pawn shops, only about 10 percent said they were able to obtain their weapons from such outlets through purchases or trades. Of those, the majority reported that a background check was conducted as part of the sale, although in many cases they did not purchase it under their own name.

In all, only about 1 percent of prisoners who used a firearm during their crime had obtained it through a retail sale. 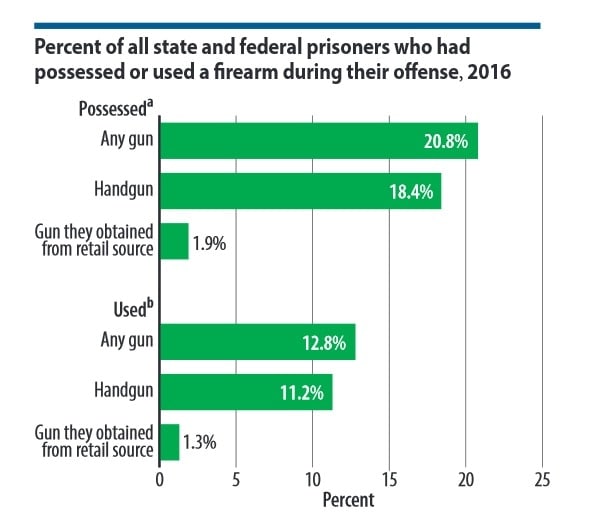 Firearms industry insiders with the National Shooting Sports Foundation said the news comes as no surprise, as they have long noted the steady decline in the number of firearms sourced from gun retailers used by criminals. In 1991, retailers accounted for about 21 percent of guns possessed by state inmates. By 1997, the number had dropped to 14 percent. The survey data released this week showed 2016’s numbers declined to 10 percent. 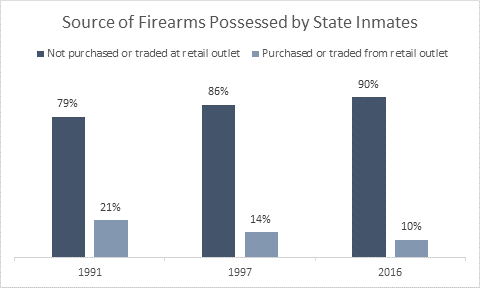 “While the latest survey covers federal inmates as well, our chart above compares only the state inmate data, which has been a consistent metric over time,” said Lawrence G. Keane, NSSF senior vice president of government and public Affairs and general. “This apples-to-apples comparison reveals that only 10 percent of criminals obtained their firearm from a retailer. Of that small and declining share, the survey shows that about 7 percent of inmates used their own names when purchasing a firearm from a retailer.”

Drawing lessons from the data, Keane pointed out that the survey has “consistently shown that there is no such thing as criminals exploiting a ‘gun show loophole’ to arm themselves for their crimes. Perhaps lawmakers should spend less time on these ‘solutions in search of a problem’ and more time on fixing the background check system, or on any of the issues that voters actually rank as a priority.”