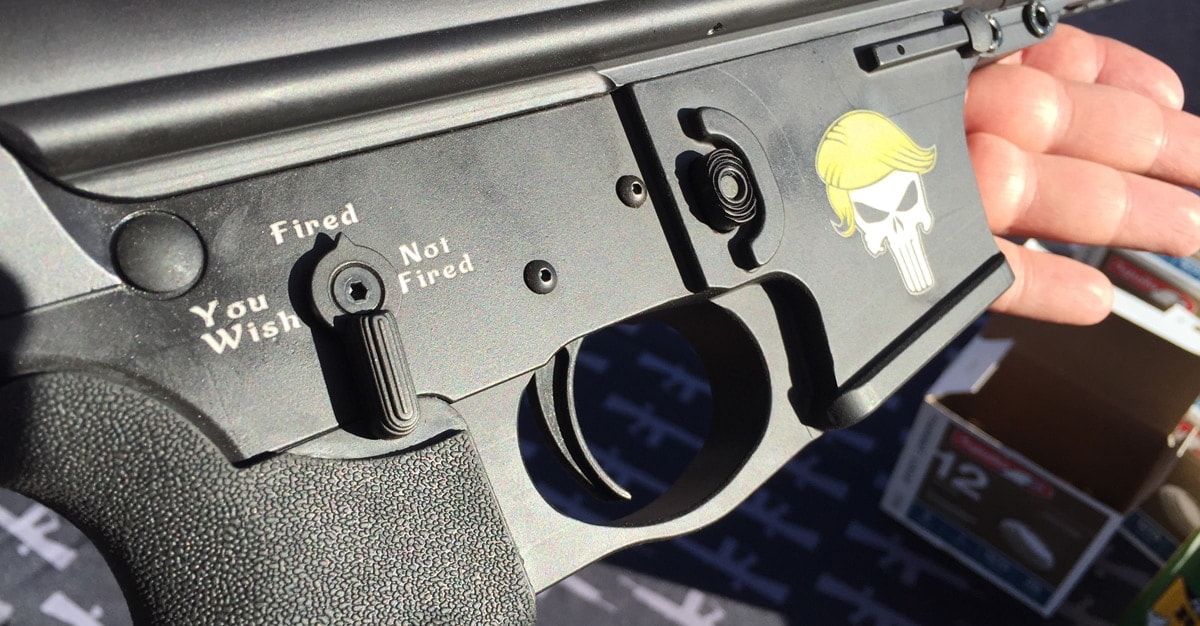 According to Sol Invictus Arms, the “PT” in the PT45 stands for either “President Trump” or “Punisher Trump”. (Photo: Daniel Terrill/Guns.com)

In honor of President Trump, Florida-gun maker Sol Invictus Arms released the PT45 in Las Vegas during SHOT Show 2019. The limited edition pistol-caliber carbine is equipped with a lower receiver with markings that mimic the 45th president’s signature style.

The selector switch offers Trump’s pugnacious catchphrases “you wish”, “fired” and “not fired” in lieu of traditional options. Then, on the right side is a punisher’s skull with Trump’s iconic quiff and on the other the serial number begins with the prefix “MAGA”, the acronym for Trump’s 2016 presidential campaign slogan.

“We’re not very politically correct at Sol Invictus Arms, so we wanted to lay it out there and create some conversation,” said Mike Conn, president of Sol Invictus. He added they had seen the “punisher Trump” logo popping up and thought “what the hell, let’s do a gun.” And, they also thought chambering it in .45 ACP was fitting given the numerical order of Trump’s presidency.

As Conn explained, the PT45 was another way to bring attention to the newly formed Sol Invictus. The brand was started by parent company Tactical Superiority, a gun parts maker, in 2017.

The left side of the Sol Invictus PT45. Serial numbers on the limited edition models will begin with MAGA, the acronym for “Make America Great Again.” (Photo: Daniel Terrill/Guns.com)

When asked to assess Trump’s performance, Conn answered with business in mind. “(Trump has been) terrible for our business in all honesty. Obama was the best salesperson we ever had,” he said and explained Tactical Superiority sold enough gun parts to build “1,000 AR-15s a month” during President Obama’s eight years in the White House.

During the Obama Administration, gun companies made record sales year-after-year as the industry raised fears that Obama would impose stricter gun control laws. While gun sales have maintained a comparable pace in the two years since Trump took office, avenue revenues have fallen amid a buyer’s market.

Yet, Conn said he anticipates another surge if the political tide turns. “Currently, nobody is afraid that they’re not going to be able to buy their guns, so sales dropped dramatically,” he said. “Now with this new legislation the democrats are trying to push through, we think the sales will start to return.”

Exactly how limited the PT45 will be is unclear, but Conn said they’ll be available by the end of the January.